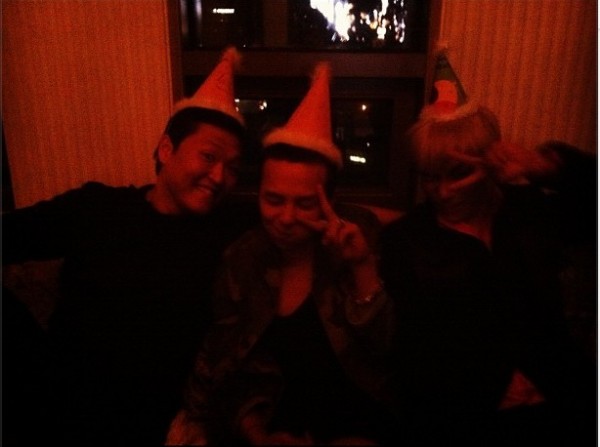 It was another fun week with K-Pop celebrities capturing moments of everyday life and sharing them on social media!

2NE1’s Dara showed how to warm up before going in to the water, while G-Dragon shared a freaky photo of himself in the water! 2PM’s Taecyeon transformed into So Ji Sub’s character from “I’m Sorry I Love You,” 2AM’s Jo Kwon turned into a freaky nun, and Lee Hyori looked almost like an owner of a flea market stand!

“Find Suzy! Can u guess who real Suzy is!” – miss A’s Suzy finds someone who shares an uncanny resemblance to her!

“Meow. Is everyone working hard on Halloween as well~?” – 2PM’s Taecyeon transforms into “Okcat” for Halloween!

“Now I should call her boss Jang! I’m at Luxembourg with boss Jang.” – Super Junior’s Eunhyuk goes on vacation with his mom!

“If you love me.” – NS Yoon-Ji tweets a photo of herself with Jay Park, which initially sparked dating rumors. It was later revealed that “If You Love Me” is the title of their new duet song.

“Goodbye Sangchu! You’ll do great in the army. Good luck!! I will bring kimbap and visit you. Take care, haha.” – Ex-After School member Kahi promises Mighty Mouth’s Sangchu that she will visit him in the army!

2PM’s Taecyeon finds his newest doppelganger – Yagami from “The King of Fighters ‘95”!

“I bundled myself up and went for a walk. It wasn’t planned but I wondered around for a long time. Do you think I had a good time?” – Kara’s Han Seung Yeon gets ready for the cold winter!

“In last year ‘Gangnam Style’” – G-Dragon shares a past photo partying it up with PSY and T.O.P!

“Isn’t this funny to tweet pic with Jack Dorsey, founder of twitter. It was pleasure man.” – PSY takes a photo with Twitter’s founder, Jack Dorsey!

“Remember three years ago when I filmed ‘2NE1 TV’ in the Philippines? Back then, I went to Subic and jet-skied all by myself and now I’m here alone again. But there’s one difference. I added something to my warm-up. Back then, I only danced to ‘Fire‘ to warm up, but this time, I’m adding ‘I Am The Best.’ Warming up is a must for everyone’s safety before going into the water.” – 2NE1’s Dara shows how to warm up before going into water!

“Thank you Sungmin! Thank you producers! Thank you writers and our listeners! Starting next week please take good care of us and tune in to listen to our program!” – Super Junior’s Ryeowook shares a photo of him with Sungmin after the recording of “Super Junior’s Kiss the Radio.”

2PM’s Taecyeon dresses up as So Ji Sub’s character in the drama, “I’m Sorry I Love You.” Don’t they look alike?

“Our team has a looker, a dancing god, but of course the best is me; the god of selca.” – SHINee’s Jonghyun looks sexay in his latest selca!

“My room. The place I haven’t been to too often because I’ve been so used to my dorm. First time it’s ever been released!” – Super Junior’s Leeteuk reveals his room for the first time, before enlisting in the army. He later said goodbye to his fans with another photo, alongside the message, ““Looking forward to 21 months later..Good Bye..^^”