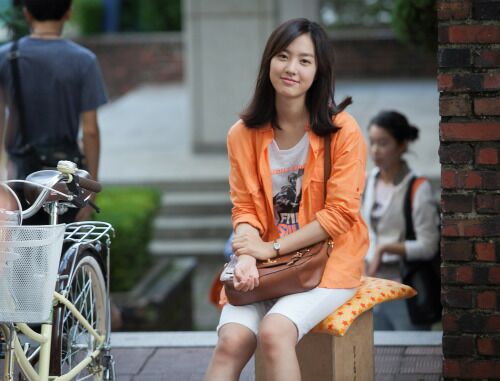 Recently during an interview, Jin Se Yeon said, “I wasn’t really interested in boys until middle school. And I went to an all girl’s school for high school, so I didn’t have a chance to make a boyfriend or date anyone. So my first kiss was at work. That is, on a filming set, with my co-star.”

Jin Se Yeon confessed that she learned about dating, relationships, and affection through work. Previously, Jin Se Yeon starred in “My Daughter The Flower” with Lee Ji Hoon and Choi Jin Hyuk. Through this drama, She had her first “baby kiss” with Lee Ji Hoon and experienced her first kiss with Choi Jin Hyuk. Currently, she is starring in “Five Fingers” with Joo Ji Hoon, where she says that he is helping her a lot.

She commented, “When we filmed the kiss scene, he led me and comforted me. He told me, ‘Just trust me,’ and that’s what I did. Later when I saw it on TV, it looked really pretty. There’s 11 years of age difference between me and him, so I look up to him and lean on him a lot.” She added, “I am still quite lost when it comes down to melodramatic scenes, but I’ve been studying a lot watching other TV shows and movies. Also, I’ve been extremely lucky in terms of my co-stars. From ‘My Daughter The Flower,’ to ‘Bridal Mask,’ to ‘Five Fingers,’ I’ve aways worked with a good partner.”