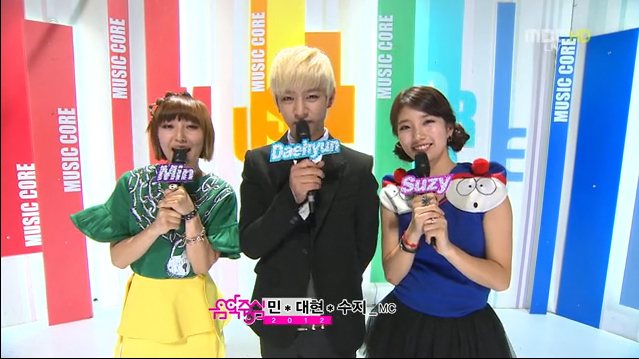 Today’s episode of Music Core featured special hosts miss A‘s Min and Suzy along with B.A.P‘s Daehyun. The regular hosts Taeyeon, Tiffany and Seohyun are currently in the US with the rest of Girls’ Generation for a concert this weekend.

Lots of new music was featured today. Boyfriend had the biggest comeback of the night and performed “Janus.” While NS Yoon-G had most of her comeback stages last week, she had her first Music Core performance of “If You Love Me” tonight and featured Dalmatian‘s Simon. Cube Entertainment‘s new solist Noh Jihoon also had his debut stage.

Next week will feature the comeback performance of Son Dambi. Check out her teaser at the bottom of page 2.