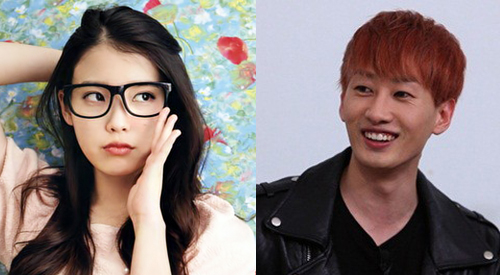 Unsurprisingly, IU and Eunhyuk were the hottest search terms over the weekend on Korea’s two largest portal sites because of a picture of the two idols posing together. Because, they.. posed together. Posed together. Loen Entertainment immediately released a statement that they’re good friends, but many netizens believe that the company is just trying to cover up their relationship. It’s anyone’s guess, really, whether it’s true or not until one of the two involved comes out to confirm. The chances of that will be pretty low since IU has recently revealed on a variety show that she wants to keep her dating life a secret.

As many celebrities frequently use social media like twitter, they post a lot of pictures of themselves and friends. So it’s interesting how IU and Eunhyuk’s photo received such scandal flare when there’s many 1 on 1 girl:guy idol pictures floating around. If every picture was considered as evidence, that’s a lot of dating and mixing going around.

This is just for laughs, but here are some “evidence” of K-Pop idol couples. But you know what? Maybe some of them really are dating. What do you think?

1. Does this mean IU is two-timing because she took a picture with 2AM’s Im Seulong?