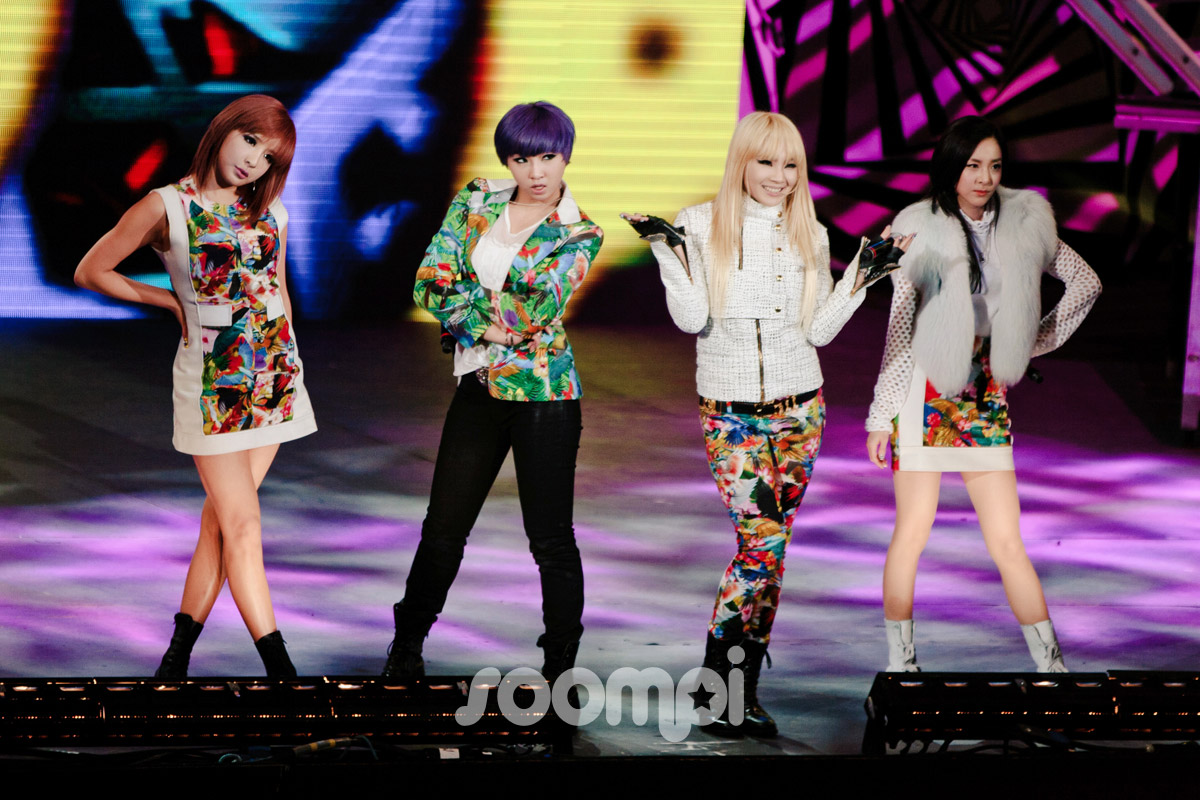 I think K-Pop is seriously invading Southern California – this is the second K-Pop concert within a month that took place at the Verizon Amphitheater in Irvine, California. The previous week, Big Bang performed two concerts at the Honda Center in Anaheim. I am on K-Pop cloud nine because I got to see some of my favorite groups two weekends in a row.

On November 10, 2012, Kara, SISTAR, 4Minute, BEAST, Girls’ Generation, 2NE1 and CNBLUE performed at the SBS K-Pop Super Concert. Fans from near and far piled in on a chilly evening to enjoy some head bopping, glowstick rocking K-Pop music.

The night was opened up by our three emcees, CNBlue’s Yonghwa, Girls Generation’s Tiffany and BEAST’s Kikwang. They thanked everyone for coming and got the crowd ready for the show. I was hoping for Tiffany to translate more of the Korean into English but there were times where they carried on conversation in Korean leaving most of the audience in the dark. I can be forgiving in this case because it was Yonghwa up there, no bias at all ^^. They introduced the first two acts and the show began.

4Minute opened up the concert with “Volume Up” and then went into “Mirror, Mirror.” They dazzled the audience with their moves and catchy songs. Jiyoon then greeted the audience in English. As the girls went into their third song, “Heart to Heart” more glowsticks in the audience began to follow along with the beat. I was waiting for CNBlue’s Jungshin, who was in the video for this song, to jump out on stage to make a cameo, but sad to say he did not. The girls closed out their set with the fast paced “Hot Issue.”

The crowd roared as the ladies of SISTAR came out on stage. They opened up with “Alone” or what I call the “leg dance.” They went into the catchy body-rolling song “Ma Boy.” They took a quick break to greet the audience, which was translated by SoYou. They didn’t say much as they went into the last two songs, “Loving You,” which got some of the crowd standing and swaying along and “So Cool.” The girls gave a last thank you to the crowd and left the stage.

Our emcees came out again to introduce the next group, a YouTube sensation named Karmin. This is a duo made up of Amy Heidemann and Nick Noonan, who became famous for doing a cover of Chris Brown’s “Look At Me Now.” They began their set with their cool and energetic “Hello” which is quite catchy. They went into the next song, “Crash Your Party” which showed off Amy’s rapping skills. I like her – she’s got some 2NE1-like attitude going on. It wasn’t until they performed their last song, “Brokenhearted,” where audience members went, “Ohhhh I know this song.” I saw the guy in front of me mouth, “This is them?” to the girl sitting next to him. I have heard “Brokenhearted” on the radio and didn’t know it was Karmin until I had Googled them the morning prior to this concert. I liked their sound and will most definitely be looking for more of them in the future.

Tiffany and Kikwang came out and thanked the audience again for coming. Tiffany talked about how big K-Pop was becoming and evolving into its own genre. As they were on stage talking, I was ready to stand up because I knew who was coming next. They are the reason I got into K-Pop, and CNBLUE was next! The giddy little teeny bopper in me started to emerge.

At this point, because I didn’t have a glowstick, I was waving my pen around as they began to perform “Alone.” The crowd goes wild as Yonghwa asks everyone to stand up. They go into “Love” with the audience clapping and singing along. It’s so much more fun doing these motions with real people instead of at home in front of my computer. Yonghwa said in English, “We want to thank our fans, thank you” (short and sweet, emphasis on the sweet). He then says the next song will be “Intuition” as the crowd roars in anticipation, or maybe I was just so loud I thought the crowd was yelling with me. You just can’t stay seated with the band up there! They closed out their set with “Hey, You” with the audience pumped and ready for more performances. I was ready to chant encore but I needed to stay a bit professional.

The boys were followed by Kara, who wore some bright coral-colored outfits. I liked this – I liked the colors because they stood out from the screens in the back. At this point, the entire male population in the amphitheatre stood up. They began their set with “Pandora,” receiving screams when they did the jacket off the shoulder move in the choreography. The weather around us in the open amphitheatre was frosty but all the dancing and waving of arms has made the audience warm. Kara went into “Step,” which was a great high-energy performance. After this, Gyuri thanked the audience and Nicole translated and thanked her family for coming, which was cool. I found out that Nicole’s aunt was sitting behind me – no wonder the older lady knew all the words to the songs! They closed up their set with “Lupin” and “Mister.” I think they did a great job, as I hadn’t seen them live before and enjoyed the great performance they gave.

The guys of BEAST had the full attention of the audience as they came out from under the stage. I remember when they first debuted and watched them on the music shows thinking, “I wonder if they will make it.” Fast forward three years later and I am impressed. The guys went into their first song of the night, “Shock.” The next one they performed was “Fiction” which was my favorite because of what I call the “fancy feet” choreography. It looked cool in the music video but in person it’s so much better. They had to take a quick pause and greet the fans. Doo Joon started it off in Korean with Dong Woon translating in English. It was a quick thank you and they were back into singing and dancing as they went into the upbeat and cute song, “Beautiful.” This song is just so adorable, and they are just so cute as well. They closed out their set with “Beautiful Night,” which just makes your head bop along. I think I have become a BEAST fan after seeing them perform these four songs.

Tiffany and Yonghwa come out again pumping up the crowd. They kill time until Kikwang joins them again on stage. Yonghwa greets Kikwang by saying, “Awesome show,” which he replies with “What?” Tiffany translates as everyone in the audience is laughing.

Tiffany explains that they have to redo the opening of the show so they can make a cooler entrance. We go through the whole opening of the show again – this time the emcees rise from underneath the stage. Yonghwa then tells the audience that we did “Very nice” and Kikwang throws in “So awesome” to stir up some more chuckles.

As the emcees introduce the next performers, everyone in the place stands up as 2NE1 comes out on stage welcomed by cheers and waving glowsticks. There is a presence to these ladies as they perform because they rocked it. They kicked it off with “Fire” with everyone dancing and singing along. The audience jumped along as they went into “Can’t Nobody.” I think I was probably waving around my papers and pen at this point. You just can’t stay still while watching 2NE1 perform. Time for their greeting of the audience where CL asked, “Are you guys having fun tonight?” She had everyone repeat, “Naega jeil jal naga” or “I Am the Best” in Korean as they went into the song. They slowed it down for the last song, “I Love You” as Dara made cute heart signs with her hands to the audience. Now I am regretting not going to their concert when they came to California – they are incredible with their stage presence, spewing attitude and no-nonsense girl power.

The last performance was by “Girls Generation” who came up from below the stage and strutted down to a slow intro version of “Genie.” The audience, still standing, gave the girls a very warm welcome as they began to dance. They went into “Mr. Taxi” which I have to admit has a very addictive hook. There was then a quick greet to the audience by Tiffany. The other girls tried to say things but they couldn’t hear each other on stage so they just went into “Run Devil Run.” There is something about this song that always sticks in my head after I hear it. The girls closed off their set with “The Boys.” This song shows us that Girls’ Generation is not always so cutesy – they have sass as well.

The night ended with all the stars on stage with a sad audience realizing all this fun is over. Yonghwa tried to get someone from each group to say something, and everyone just thanked the fans for coming out. While the other groups were leaving, Girls’ Generation, CNBlue and BEAST all took bows to the enjoyment of the fans. I’m always a little wary about concerts that have a hodge podge of performers but this one had a good collection of artists. It was a very chilly night in Irvine as we sat outside but no one was complaining. The dancing and singing warmed us up until we walked back to our cars.

Don’t miss our coverage of the CNBlue fan meeting, as well as our huge gallery of photos from the concert.