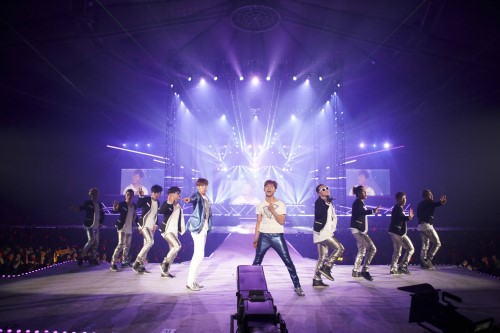 DBSK has kicked off their new world tour in Seoul. On November 18, the duo started off their “TVXQ Live World Tour ‘Catch Me’” at the Seoul Olympic Stadium. 25,000 fans gathered to watch the legendary group hold their first Seoul concert in four years.

Yunho and Changmin gave a passionate and charismatic performance that captivated the entire audience. As their fans waved their red glow sticks, the duo appeared by hanging on wires. They opened with “Rising Sun” and then “O.” They gave a powerful dance performance, showcasing their rhythmic and charismatic dancing abilities.

Although there were some technically difficulties with the music during their “Get Away” performance, DBSK reacted professionally and coolly went on with the show.

To his fans Yunho said, “We’re sorry we made you wait four years for us to have a concert in our own country. After today I can only see the field of pretty red glow sticks.”

The duo also performed their new single “Humanoid,” “As I Stand,” and “Keep Your Head Down.” Yunho and Changmin also gave a special solo performance. As a treat, actress Lee Yeon Hee and f(x)’s Sulli gave a special video presentation for their label mates.

After performing for three hours DBSK gave an encore performance of “Rising Sun” and “I’ll Be There.”

DBSK will continue their tour in Hong Kong in January.