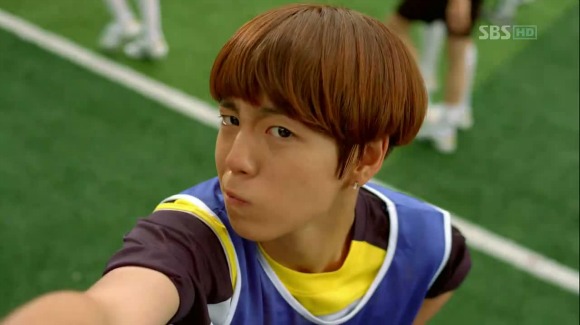 [Outside Seoul] A K-Drama Dictionary of Words to “Borrow”

I’m excited to introduce our new guest blogger, Llamaesque, who has a great K-Drama blog over at Outside Seoul with the tagline of “Korean Drama from the Outside In.” Though relatively new to the world of K-Drama, her motto is a simple one: “I want to watch Korean dramas now, and I want to watch them all—the old, the new, the classic, the trash.” This outrageously basic premise has led her to consume an unbelievable number of K-Dramas in the past year – enough to put someone like me to shame! I’ve found her blog to be such a refreshing point of view, great for those who are new to Korean dramas and culture, as well as Korean Americans like myself who grew up watching them. We’ll be featuring some of her great content here on Soompi once a week or so, though I trust you’ll be running over to her blog on your own soon enough. -soomp

While watching Korean dramas, I often come across words American speakers of the English language are tragically lacking. Sure, we have bon mots like kerfuffle, mooncalf, and onomatopoeia. But what about selca, CF, and skinship?

It’s clear that Korean has borrowed many words from English; as far as I’m concerned, it’s high time English returned the favor. Here’s a list of Kdrama terms and concepts that are essential to life in the modern world, wherever you are.

Meaning: Chiseled abdominal muscles that stand out like the segmented pieces on a chocolate bar

As seen in: Big, and every single drama that includes a gratuitous shower scene (Thank you, Korea!)

While America does have an exact equivalent for this term, it’s not nearly as wonderful. Sure, abs can look like a six-pack of beer as seen from above, but why associate something so marvelous with cold, hard, metal? The Korean conception of chocolate abs is much more appealing. Who can say no to a nibble, after all?

Yoon Eun Hye and Lee Seung Gi sure make a cute couple. You should get on that, Drama Overlords.

As seen in: Greatest Love

Like so many entries on this list, CF is actually a short version of an English phrase that isn’t used in English-speaking countries. Why CF evolved in Korea and not on American shores isn’t clear, but I suspect it has something to do with the frequency of celebrity appearances in ads: it seems as if every big Korean star shills for a list of products approximately as large as my town’s phone book.

This abbreviation allows the arty word film to be appended to something we Americans see as slightly crass—celebrity endorsements. Somehow, this tiny addition manages to class up the concept to the point of making it sound like an art form. It’s all about positioning: a commercial is something you fast-forward through; a commercial film is a work of art that just happens to be selling a kimchi refrigerator or foundation for men.

Maybe we Americans will start talking about CFs someday, too. After all, “serious” actors like Brad Pitt are now appearing in television ads, which seems to indicate that a change is brewing. (Who can blame him for that bizarre Chanel ad, anyway? He’s got a lot of kids to put through college.)

If Jan Di had spent more time fighting in Boys over Flowers and less time saying Fighting! it would have been a much better drama.

Meaning: An expression of encouragement

As seen in: Boys over Flowers, and every other modern Kdrama romantic comedy

American parallel: You can do it!

Along with its distinctive arm gesture, Fighting! started off as a cheer used during Korea’s 2002 World Cup matches. If the (many, many, many) Kdramas I’ve watched are any indication, it caught on big time and is now an indispensable part of communication in Korea.

It’s no great surprise that Fighting doesn’t really have a direct equivalent in America. If Fighting is Korea’s cultural keyword, America’s is Cool; we rarely offer this kind of encouragement and support. (The horrible, dated expression “You go girl!” might once have worked, but nowadays it’s exclusively used for the purposes of mockery.)

Ironically, this word that the English language is sorely lacking is actually an English word in the first place. If we adopted it in its new, Korean form, it might just make us better people.

All I know for sure is that I’m always encountering situations tailor-made for Fighting!, but its effectiveness is diminished by the need to explain what it means before I can say it.

I’m sorry, but I can’t write a caption for this picture. I’m too busy restraining myself from making naughty jokes about eating ramyun. Suffice it to say, these are the boys from Flower Boy Ramyun Shop

Meaning: Pretty, pretty boys who aren’t afraid to put some effort into how they look. (Did I mention that they’re pretty?)

As seen in: Practically every Kdrama made since the 2009 airing of Boys over Flowers

Like many Western fans of Kdrama, Boys over Flowers was my first exposure to Korean television. But when I started watching it on Netflix streaming, I had literally no idea what the title meant. Boys? Flowers? In America, those two concepts rarely go together.

In Korea, though, flower boys are all the rage. Heck, there’s even a series of television shows created specifically to take advantage of their appeal: tvN’s “Oh Boy” dramas, which includes Flower Boy Ramyun Shop, Shut Up: Flower Boy Band, and the eagerly anticipated Flower Boy Next Door.

Key traits of flower boyhood are a slender body, a delicately lovely face, and fastidious personal grooming habits, sometimes even to the point of wearing makeup. Being a pretty boy is something Korean men actively aspire to, which is why in 2011 they were responsible for a quarter of worldwide sales of cosmetics made specifically for men.

Mainstream American culture would probably consider most flower boys too feminine to be attractive, but we in the know realize that life without flower boys is barely worth living.

Kim Ji Won, you were so cute in What’s Up that I completely forgive you for To the Beautiful You.

As seen in: Endearingly goofy Park Tae Hee from What’s Up and dreamy Yoon Ji Hoo in Boys over Flowers

Regular human beings live life in three dimensions. But some people seem to exist on a different plane, never quite thinking or acting like anyone else. They’re easily distracted, whether by pretty things or big ideas, and prone to misunderstanding what seems obvious to those around them.

(I suspect that people in my life would be especially grateful if this phrase entered the English language: they’ve probably spent a lot of time trying to figure out how to describe me, after all.)

You know it’s true love when a flower boy dyes his hair gray for you, as Kim Bum’s character has done in this scene from The Woman Who Still Wants to Marry.

Meaning: A story focusing on an woman’s relationship with a younger man

As seen in: The Woman Who Still Wants to Marry and I Do, I Do, among many others

When I first started watching Korean dramas, words like noona and oppa were stunningly exotic; as a speaker of English, I’ve spent most of my life calling everyone I know by their first name. Koreans, on the other hand, have at their disposal a complicated network of words indicating almost every kind of relationship, from your father’s older brother (keun aboji) to the youngest person in your group of friends (maknae). There’s a case to be made for either of these approaches: the American way of doing things emphasizes equality, while the Korean way emphasizes interconnection.

But lacking a similar classification system, we Americans don’t have have an easy way to describe a romantic relationship between a woman and a younger man. (Not that we have much call to do so, anyway: As long as an age difference isn’t enormous, it probably wouldn’t be mentioned at all. And if it is enormous, in the post-Demi-and-Ashton world it’s almost certainly a relationship between a older man and and a younger woman.)

On other hand, Korean dramas glory in older women dating younger men. There are a number of sensible reasons for this: It’s a good source of narrative friction in a society that values age-based hierarchy. Plus, mandatory military service in Korea means that it’s harder to pair actresses with their peers—until they’re safely in their thirties, a chunk of the male population is otherwise occupied at any given time.

As genres go, the noona romance is probably my favorite. So what happens when similar plotlines appear in Western entertainment, like the upcoming Hello, I Must Be Going? I spend a lot of time explaining to my friends that “noona” doesn’t indicate a matinee showtime, that’s what.

Lee Hyun Woo, you were so darling in To the Beautiful You that no forgiveness is necessary.

Meaning: A photo you’ve taken of yourself

As seen in: Cha Eun Kyul’s selca diaries in To the Beautiful You

American parallel: To the best of my knowledge, there isn’t one

Fifty percent of the profile pictures on the Internet are probably selcas, yet we Americans have yet to realize that it would be handy to have a word to describe them. When we finally do catch on, the Korean version will fit right into our language: it’s a mashup of the English words self and camera, after all.

I don’t think they waited for marriage in Can We Get Married, btw.

As seen in: Most cable dramas, including the currently airing Can We Get Married?

American parallel: Long strings of words like “physical displays of affection,” but nothing as short and catchy

There’s an urban legend that the Eskimo language doesn’t include a word for snow. Instead, the legend states, there are words for “heavy, wet snow,” “snow that’s falling slowly,” and “hard, crusty snow.” The theory is that in a world where it’s almost always winter, specific descriptive terms for snow are more useful than the general word.

And that, my friends, is why there’s no American version of the word skinship. Physical intimacy here isn’t a big deal; we’re prone to casually touching those around us and displays of affection happen all the time. For example, consider my favorite recess game during elementary school: Kiss Tag. This is exactly what it sounds like—the person who was “it” had to kiss whomever they could catch, at which point the kissee became the new “it” and repeated the process. By the end of the first game, I had the kissing experience of the average thirty-year-old Kdrama heroine. (I was a slow runner, by fate or design. I’ll never tell which.)

Even in America, it’s hard to imagine the word Skinship not coming in handy: It’s shorter and more concise than most of our descriptions of physical intimacy, so why not use it?

For more Kdrama commentary and reviews, visit Outside Seoul.

Boys Over Flowers
Flower Boy Ramyun Shop
Shut Up: Flower Boy Band
The Woman Who Still Wants To Marry
What's Up
Big
To the Beautiful You
Greatest Love
Can We Get Married?
How does this article make you feel?