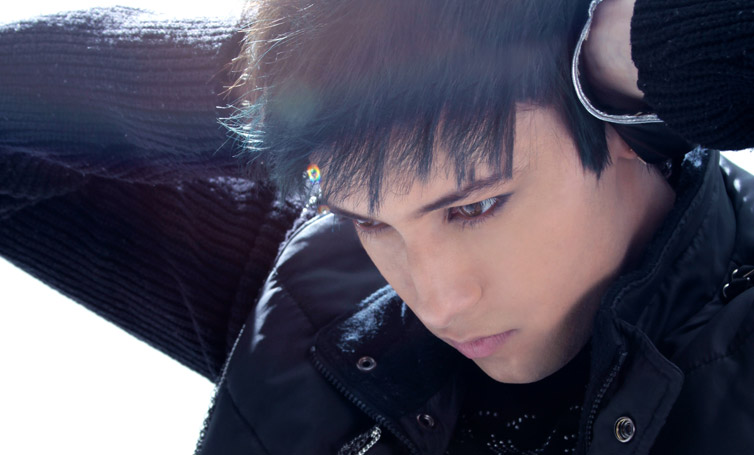 Soompi, are you serious? You really interviewed this guy? You know he’s just making fun of K-Pop, right? Don’t you know that Heart2Heart was a big joke?

It’s likely that you clicked on this article out of morbid curiosity, so you might as well stick around for the show. Many of you will remember last year’s notorious “Facebook Official” with about as much affection as I did, so when I found out that one of the guys on my panel at KCON was a member of Heart2Heart, you can imagine my confusion. For those not familiar with Heart2Heart, they became an instant YouTube sensation (a la Rebecca Black) and was widely received as a parody of K-Pop and the boy bands of yesteryear.

So how did David Lehre, a.k.a. Chad Future, get invited to not only speak but perform at KCON, and why would I want to interview him? It turns out that David, an accomplished video producer, is a huge fan of everything that makes up this phenomena we call K-Pop – the look, the sound, the style. Like many of us, it was the music videos that initially drew him in, causing him to wonder, “Why don’t we have this here in America?”, which is what started this journey to develop what he calls American K-Pop, or AK-Pop. It’s this blending of American and K-Pop sensibilities that he wants to introduce to the world through the Chad Future Project.

How he got connected to these K-Pop producers and songwriters is an interesting story in itself. Apparently, all boy bands know each other (who knew?), and he heard through the grapevine that Drew Ryan Scott of Varsity Fanclub liked Heart2Heart’s video and wanted him to direct their next video. It turns out that Drew, “from this boy band, wrote songs for Super Junior, Girls’ Generation, TVXQ, Taeyang – pretty much every K-Pop group I like. This whole world of K-Pop opened up to me in a different way, realizing that a lot of these songs were written by people down the street from me.” Drew introduced him to Sammy Naja, who wrote for SHINee’s Japanese album, and connected him to a whole group of K-Pop producers and writers. That’s how the ball got rolling.

As the first person to walk this path, he’s the first to admit that he’s going to fail at times, since he can’t learn from others’ mistakes. “I don’t want to just sit here and talk, ‘What if I put K-Pop and American pop together?’, so I decided to just start doing it. Who cares if it’s big or small – just get the idea out there, and keep working on it.” The plan is to release three self-funded music videos for Chad Future, and then try to sign a record deal after that. “I wanted to get the purest form of my vision out, workshop it on my own. I knew in my head that a big company wouldn’t take a gamble on something that’s the first of anything, so I didn’t think it was worth my time to aggressively pursue a label in the beginning. I’m grateful for the people I’m able to work with – they are amazing in this field. I don’t think it’s much different than what a record label would have put together for me to be honest. They would have paired me up with the producers and people that I’m working with already.”

But wait, we’re talking about CHAD FUTURE from the fake(?) boy band Heart2Heart! Even Lance Bass, the purported mentor of the group, came out and said that it was just a parody of K-Pop. Maybe this is all a big joke?

It turns out that Heart2Heart was actually a sincere, if not misguided, effort to bring boy bands back to America, blending elements from K-Pop music videos, which is pretty much all David watched from 2008-2011, with all the classic boy band moves. Lance Bass was actually just a last-minute cameo requested by a friend to a friend. David met Lance in 2010 when they co-hosted the Red Carpet at the American Music Awards together. “I was inspired by the AMA’s when I saw the Backstreet Boys and New Kids on the Block reunite on stage, and people went crazy for them. I said to myself, ‘Why is this not in America anymore? I think boy bands need to come back,’ so I started on my year and a half mission, funded and self-put together – I paid for everything.”

When “Facebook Official” blew up with over 25 million views, people just assumed that Lance was behind it since he was in the video, when in fact, he wasn’t involved at all, so when he made the statement on Twitter that it was a parody, it was more of a reaction to the crazy number of tweets he was getting. It was only after the fact that they decided to try to do something together, and started meeting with record labels and executives, even meeting with “one of the most influential people in Korean music. Basically, the godfather of K-Pop. He said ‘I like this – if all the guys speak Korean, it will make so much money.’ Ultimately, we never did a deal with any of the networks or companies, but it was encouraging and fun – it showed me that maybe there’s something here.”

But the name Chad Future is connected to Heart2Heart, and frankly, sounds a little ridiculous. It immediately takes away from your credibility as a “real” artist.

“Chad is actually a character I created back in high school so I’m really attached to it. I even used the name Chad in my fake boy band Heat Street back in 2005. I did some research about artist stage names – the name represents the project, what you want to do, what you want to achieve, what you want to be, your vision. What I want to represent is the future – what’s next, a trendsetter.

Lady Gaga, Bono, Snoop Dogg, Black Eyed Peas – that’s something you order at Chipotle, it’s not that cool – all (these names) are stupid. People are comfortable with them because of the success associated with them, and Chad Future is no different.” [Well played.]

David and BEAST at KPOP Masters, imagining Kikwang being with them in spirit.

Now that we got the awkward questions out of the way, how did you get discovered by the Korean press and Billboard?

“I love everyone over there at Billboard Korea. They’ve been so amazing to me. I went to (last year’s) KPOP Masters in Las Vegas on behalf of MTV and did some recording over there. I have a very good relationship with MTV, having worked with them for 7 years. I emailed them and told them there’s this thing called K-Pop, and I’m really into it, and I’d love to bring it to MTV. I don’t want to be harsh, but I don’t think that everyone in America really understands the K-POP movement yet, especially in 2011. Now, everyone’s like “Oh yeah, Gangnam Style – love it!” I met with the organizers of KPOP Masters and Billboard Korea and they gave me all the access I needed to the artists.” [David’s KPOP Masters video]

How did you get connected with KCON?

“The universe just started attracting people in America who love K-Pop to me. I met the Koreaboo team and Mnet and became friends with them. KCON contacted me, asking if I’d like to be on a panel, and if I can get Drew involved. A couple days later, they asked if I wanted to perform, so I said yeah, but KCON was only a week and a half away! I always want to do everything to the best of my ability, and as big as possible, but would I be able to do a performance as big as I see in my head in a week and a half? Everyone needs to know that it’s just me and my friends, so when I calculated how much it was going to cost to put the show together, with rehearsals and everything, it came out to $4000 – just another thing I’m paying for. I’m not from a family of an oil tycoon or anything. I’m just a kid that’s working and living my dreams and putting all my effort into it. I ended up linking up with an amazing company called Vlado Footwear. The CEO is a Korean-American woman that lives in LA. Their fashion is geared towards K-Pop culture – they also want to bridge the gap and connect people. They provided the wardrobe and the rehearsal space for us. These things keep popping up where people are so supportive and see the vision. You can see the video online, and I’m very proud of that performance.

Tell me about Chad Future TV. This is the video that first made me think that this Chad Future guy is someone I’d like to talk to.

“Chad Future TV is a goal. I fell in love with 2NE1 because of 2NE1TV. People see me online and think ‘He’s a d*ck’ or whatever, but you don’t even know me. I want that TV show component so you can see the real me. It’s important to see the separation between the artist and the real persona. Take CL for example – on stage, she is so powerful, but off the stage, she has so much aegyo [cuteness].

I’ve been taking to major American and international networks about the show, and people are interested because it’s different and unique. People here are trying to figure out a way to work with K-Pop content, but they don’t know the entry point. With me, they have an American that the audience could instantly relate to. I can be a good entry point for a lot of international people to learn about K-Pop.” [Chad Future TV Promo – watch it!]

I know I’m not allowed to talk about who you’re collaborating with for your next video, but I think it’s huge. Working with [K-Pop star X] really puts a stamp of legitimacy on your efforts – what can you tell us about this?

“I’m lucky to be in a group of artists that meet and collaborate. This person is from LA, and has a lot of artist and dancer friends here. S/he saw the KCON performance and was very impressed with the music and believes in the vision. S/he also wants to be international and bridge the gap between K-Pop and the world. It’s a beautiful thing to see all these people get the vision.

My goal and dream is to get a lot of exposure in the next couple months so that [Korean record company Y] can say ‘Ok, this is a buzzworthy artist that we think it’s good to be in business with – it’s something we want to be a part of,’ so that they’ll give the blessing to release the video (that’s already been shot). It will be the best way to show that there really is something here.”

Say what you will about Chad Future, but the David Lehre I met is a passionate and talented young man that oozes with sincerity. A lot of people, including myself, may have written him off after Heart2Heart, or even the first single, but his vision to bridge the gap between K-Pop and the world is something I can get behind. Plus, I really want the third video with [K-Pop star X] to see the light of day. [Insert fangirl squeal.]