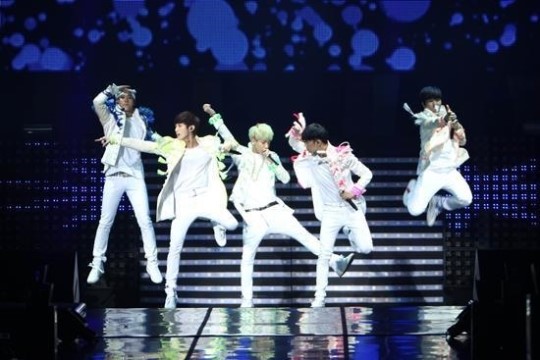 That day was cold, literally freezing. Fans trembled outside in long lines, stomping their feet and hugging their shivering bodies, as they excitedly waited for the very first B1A4 concert to begin. They compared signs and guessed what the venue might be like, and every once in a while a teenage girl would yell “IT’S SO COLD!” as if it would make them warmer. What they said wasn’t an exaggeration, it was a recorded -10celcius that day.

Despite the frigid air and the frozen ground, nothing could quench the burning fire of anticipation that was all around. That anticipation only intensified when the fans were finally allowed into the stadium and as they impatiently endured through the loop of music videos before the group actually came out, fifteen minutes after the scheduled opening.

The indoor fireworks, LED light show, and the flames of fire could not match the excitement and joy of the fans as B1A4 entered the stage and performed “Beautiful Target”, “Bling Girl”, and “In the Air.” The bouncy, upbeat tempo set the energetic mood for the concert.

After the group finished their first three songs they greeted each section of the concert. The fans did not need the giant screens to see that their oppas were elated but noticeably tired.

Baro summed up the feelings of his fellow group members well. “Already, the opening was so hot, what are we going to do? I feel like my heart is going to burst. We can’t be the only ones about to explode. Are you ready to explode with us?” If the ear-shattering screams were any indication of their answer, then the answer was yes.

Sandeul explained their tired looking faces. “To be honest, I didn’t sleep at all. However, since seeing all of you I am strengthened and my mood is really great.”

After the other members gave their greetings they moved on to “Ju Ju Ju” and “Because of You.” When those two songs were finished B1A4 gave the fans a treat by revealing a behind-the-scenes video of Sandeul goofing around. Then the boys had fun with the fans and with each other by showing off their shameless aegyo.

As cute as the group was, they were also determined to show a more mature side with the next set of “Try to Walk”, “Because I Only Learned Back Things” and “This Time is Over.”

As the highlight of the concert, the group gave their fans a special music drama that was a collection of their solo performances. The story was about a group of friends who dreamed about becoming singers. Through their solo and duet performances the members were able to show their individual talents. Some of the more memorable performances were Sandeul’s exciting rock performance and CNU’s sexy rendition of Wheesung’s “With Me.”

As a thank you to their fans, the group gave a very special performance that was probably more than the fans could ever dream of. These handsome young men donned on long wigs and white skirts and transformed into “B4 Generation”, a parody of Girls’ Generation. They performed their version of “Genie” and even had a cross-dressing fashion show. Perhaps not surprisingly, all of them made very pretty girls.

For their next act, the members chose one very lucky fan from the crowd and sang her a song as they showered her with gifts, which included flowers, a signed CD, and a special customized teddy bear. When all the other fans showed their jealousy Jinyoung said quite seriously, “Are you really jealous? Do you think we cheated on you? We know you cheat on us too. We know there are other groups in your lives but we pretend not to know. We will stay faithful to you; promise that you will stay faithful too?” Then the fans and the group shared a sweet moment as thousands of fans waved their pinkies in the air as a sign of their promise. To thank their fans again, B1A4 then performed “So Fine.”

After two power performances of “Good Night” and “Baby I’m Sorry”, the group started their farewells that seemed much too early. Jinyoung said tearfully, “I’m so happy that my dreams came true. We will always show you our best efforts.”

After “O.K.,” the fans cried encore and the boys came back with “Only You” and “You Are My Girl.” B1A4 gave it their all, running around the concert to give all the fans, wherever they were sitting, a chance to see their favorite group up close.

For their first concert B1A4 affirmed to their fans and to Korea that they were a group with much potential to do well and to go far. Individually, the members were able to showcase their unique charms and talents: Baro shines the brightest when he is rapping. CNU never fails to give a passionate and charismatic performance. Sandeul only has eyes for his fans with his generous and sincere fan interactions. Jinyoung is undoubtedly a reliable and collected leader, especially shown when he coolly responded to his microphone getting stuck on his costume. Gongchan as the youngest has an awkwardness that only he can make so delightfully charming.

B1A4 debuted in 2011 but already boasts 110,000 local fans. They recently joined the K-Pop Hallyu wave by debuting in Japan of June this year.