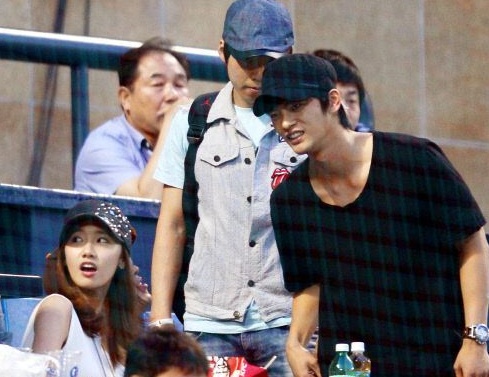 Actor/singer Seo In Gook spoke about the true story behind a scandal between himself and Girls’ Generation’s YoonA.

On the episode of “Radio Star” that aired on December 12, the cast members of “Rascal Sons” appeared as guests including Seo In Gook, Lee Sung Jae and Ryu Soo Young.

The emcees declared that Seo In Gook’s character is a playboy and also threw in, “There’s a rumor that you flirt a lot with girls,” as bait. They continued, “We heard that you went to a baseball game and didn’t watch the game but kept staring at YoonA so it freaked YoonA out.”

Seo In Gook hastily replied, “No,” and “I didn’t even know YoonA was at the stadium. We just ran into each other.” He continued, “I saw YoonA’s face on the big screen and afterwards, I went to go say hi.”

Finally, Seo In Gook cleared up the rumor by saying, “We just said hi and watched the game separately. When we were saying hi, the photograph was taken and people started to go crazy over it.”

Seo In Gook also cleared up another rumor that was being said about him being arrogant toward his seniors.

The emcees started off by saying, “We heard that after you got popular from ‘Answer Me 1997,’ you started to not greet and bow to your seniors, is that true?” Seo In Gook answered, “I just lost my timing to say hello.”

Seo In Gook revealed that the particular senior that this rumor was based on was Lee Sung Jae, his fellow cast mate in “Rascal Sons.” He said, “On the day of the camera testing, I was going to go over to say hi but he left his seat. So I tried to say hello after it was over but I had to keep working on the camera testing. So I couldn’t say hello to him.” He continued, “Just as I was about to say hello, Lee Sung Jae came up to me and said, ‘You’re the maknae (youngest) and you don’t even say hello?'”

Then Lee Sung Jae said, “Do you think I said that seriously? I said that with a smile,” which cleared up all the rumors.