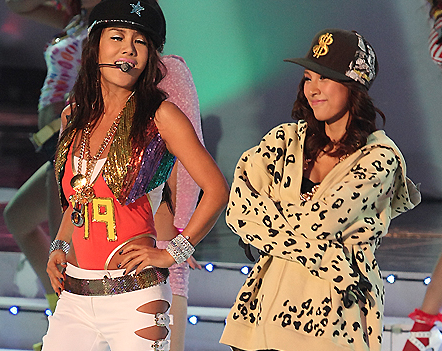 Uhm Jung Hwa and Lee Hyori recently made a bet to stir interest for the upcoming Korean Presidential Elections to be held on December 19.

On December 12, Uhm Jung Hwa tweeted, “I’m going to be voting from Seoul! Vote. Vote! Vote. Vote!” to which Hyori responded in a tweet mention with, “Unni, can I expect to see a photo of you voting in a fashionable outfit?” Netizens began to comment on both tweets, wanting to see the stars voting in their best outfits while casting their votes.

Uhm Jung Hwa gladly accepted the challenge and tweeted to Lee Hyori, “Let’s see who’s the sexiest. Let’s make a bet. Who’s the sexiest. Who isn’t as sexy!” And the two ultimately decided to go ahead and have a battle of who the sexiest voter would be, by taking proof shots on election day. Lee Hyori replied, “Sound good~loser has to hand over 10,000 Won,” which drew great interest from fans.

Netizens who saw the exchange commented, “Looks like while they’re on their way to cast their vote, it might just turn into a runway fashion show!” “They’re amazing for turning a voting opportunity into a fashion battle,” and “I look forward to seeing photos of you two voting in your most fashionable outfits!”

Lee Hyori
Uhm Jung Hwa
KPLG
How does this article make you feel?