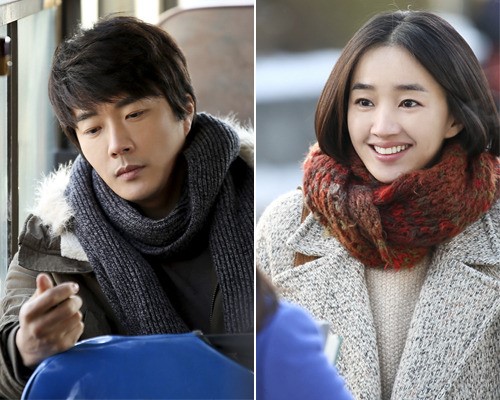 A new still of Kwon Sang Woo and Soo Ae from the upcoming drama, “Night King” is garnering attention.

This still was released on December 17 and is from the first filming session for the two actors. In the still, Kwon Sang Woo is carrying what looks like a heavy bundle and suitcase. Behind him follows Soo Ae, carrying a ramen box. Both look tired from walking on the upward hill. This still portrays the scene where the two move into their newlywed home.

Despite the cold weather, Kwon Sang Woo and Soo Ae reportedly upped the atmosphere by showing great chemistry as they portrayed the affectionate newlywed couple in the drama.

One staff member commented, “Their chemistry was the best – it was as if they were meant to be.”

Another production source commented, “A pure and innocent love brought together these two people. But they go through greed and betrayal and the love turns into hatred and revenge. This dramatic story will certainly be very interesting.”

The drama, “Night King” is the third installment of Park In Kwon‘s “Daemul” graphic novel series. Some of the cast members for “Night King” include Kwon Sang Woo, Soo Ae, Jung Yunho (DBSK), Kim Sung Ryung, Go Joon Hee and Lee Duk Hwa. The drama will air in January after “King Of Dramas” comes to an end.