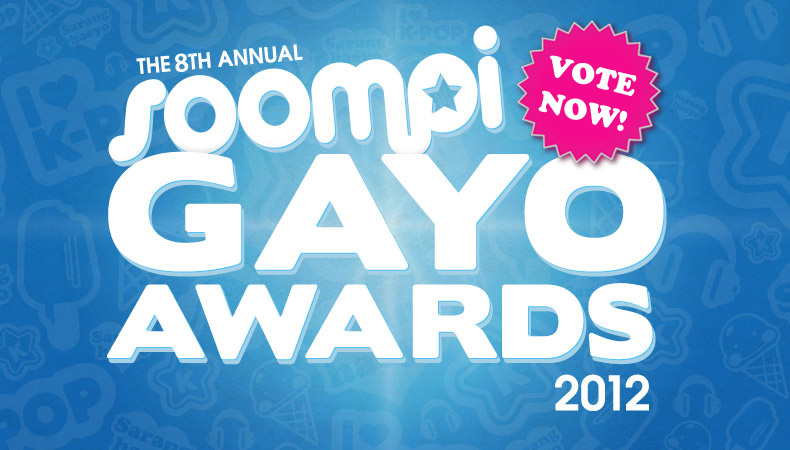 This is our eighth annual Soompi Gayo Awards event to recognize the top performers in Korean music in 2012. The 2012 Soompi Gayo Awards will be announced on New Year’s Eve, December 31. Like last year, we are proud to partner with MYX TV, and they will broadcast the award show in January 2013 (date to be announced).

As always, we take pride in achieving a fair result by utilizing many different sources for our music chart. We expect these awards to be given to artists whose songs achieved the highest popularity in Korea this year. To make our fan participation more worthwhile, we are adding netizen awards for the most popular male groups, female groups, male soloists, and female soloists. You, the fans, will vote for the Top 10 Singers of 2012. The top vote getter of each category will also be the winner of the netizen awards.

For the Top 10 Singers of 2012, we begin with 50 singers who have been in the music industry for more than one year and have received the highest scores combined on our weekly music chart in 2012. From this pool, you can vote for three singers. Your first choice will receive five points, second choice three points, and third choice one point. Each member can vote once every 24 hours this year. If we discover any cheating, we reserve the right to abandon the results of the voting. The voting deadline is December 27, 11:59 PM EST. This year your total votes will count for 50%, while the other 50% will be based on the singers’ accumulated chart scores (complete details below). The artist with the highest combined chart and voting scores will be crowned 2012 Artist Of The Year. (Please note that the voting list is for the top 10 singers are those with more than 1 year in the industry. Rookies will compete separately for the rookies award. We have mistakenly included B.A.P on the voting list. Unfortunately we have to remove them from the voting now. We apologize to fans who have voted for B.A.P so far.)

Apart from the Top 10 Singers award, the awards below are based solely on our music chart rankings. Here are the nominees:

Ailee – 보여줄게 (I Will Show You)

Mini-Album of the Year: The mini-album that accumulated the highest overall score on all its songs. Note that if a song is first released as a digital single and later included in a singer’s mini-album, the song’s score as a digital single will also be counted towards the mini-album score. Mini-album also includes EP’s and singles which can be sold in record stores physically. The nominees are:

G-Dragon 1st mini-album – One Of A Kind

Top Digital Single: Digital singles have become a popular trend in Korean music. We want to recognize the digital single which received the highest charted scores in 2012. The nominees are:

Top Mixed Group or Male-Female Collaborations: Due to the lack of mixed groups, we have combined it with the duet award. The nominees are:

Top Drama / Movie OST Song: Songs from a drama or movie that received the highest scores on our chart. The nominees are:

Lyn -시간을 거슬러 (Back In Time, from MBC drama “The Moon That Embraces The Sun”)

Last but not least, the prestigious Chart Champion award, given to the singer with the highest chart scores in 2012.

*The calculation method of the Top 10 Singers is as follows:

Seasonal: Albums and songs released towards the end of the year are weighted higher than the beginning of the year because more popular singers and important albums are usually released in the second half of the year. We are using an increment of 0.01 each week, starting from January Week 1 with a factor of 0.75. July Week 1 is the mid-year point and the factor is 1. December Week 4 is our last week and the factor is 1.25.

Position factor: To reward songs that rank higher in the chart, we assign a weight for each song each week. Even though our weekly chart has 50 songs, the focus is still on the top 20 songs. As a result, songs from No. 1 to No. 20 will receive a considerably higher factor than songs from No. 21 to No. 50 each week, as follows: