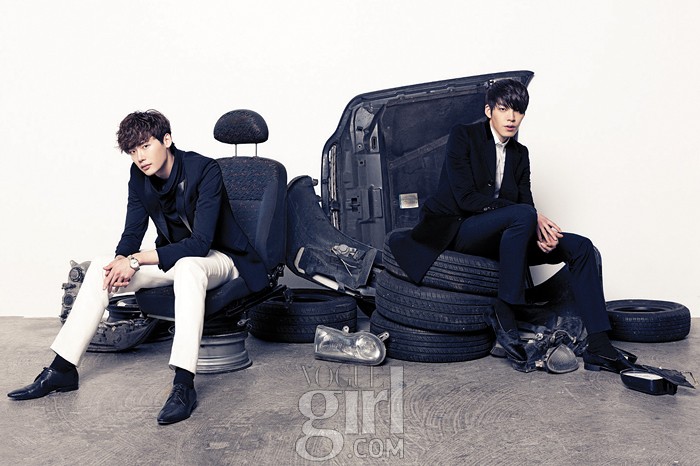 Actors Lee Jong Suk and Kim Woo Bin, who were originally models, showed off their experienced “model force” in a recent photo spread.

Lee Jong Suk and Kim Woo Bin posed together for the January edition of “Vogue Girl,” where they displayed their superior body proportions, especially their long legs. The two actors wore a collection of classy suits and showed fans and viewers that they were indeed successful former models in the past.

The pictorial highlighted Lee Jong Suk and Kim Woo Bin’s manly and charismatic charms. They posed with a gray,black, and white toned theme with car parts as props, giving off a sense of masculine energy. Fans were especially able to see their modelesque aura through their experienced facial expressions and poses.

Before acting, Lee Jong Suk started his modelling career in 2005 and became the youngest male model of the Seoul Collection program. Kim Woo Bin debuted as a model in 2006 and walked on the runway for many different fashion brands and collections.

The two actors are currently playing enemies with a sad history in the drama “School 2013.”