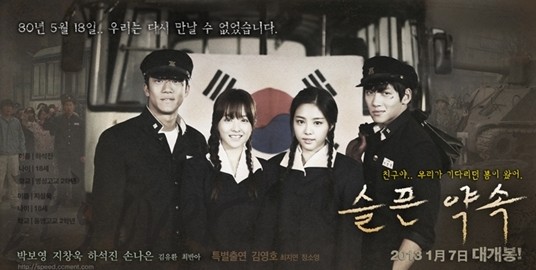 Boy group SPEED will come back with a big-scale music video that features many dazzling stars.

On December 24, Core Contents Media released a new SPEED channel site, which contains information about SPEED’s come back including their album production process, BTS clips of their music video and much more.

The teaser clip for SPEED’s “It’s Over” was released today. The drama version of the music video, “Sad Promise” features not only Park Bo Young but also Ji Chang Wook, Ha Suk Jin and A Pink‘s Son Na Eun. The four actors also gave their Christmas greetings in a separate clip.

SPEED’s music video will star Park Bo Young, who will have transformed into a femme fatale character and also SPEED’s powerful LED performance. The video will be directed by Cha Eun Tek.

The drama version of SPEED’s music video has a budget of a whopping 750 million won (about $750k) and will have a eighties background. The story will revolve around four characters and show the sadness of friendship and love. The cast also includes skilled actors such as Kim Young Ho, Jung So Young and Choi Ji Yeon. About 700 extras and high-quality props such as military tanks, have been included in the music video as well.

“Sad Promise” will be released on January 7.