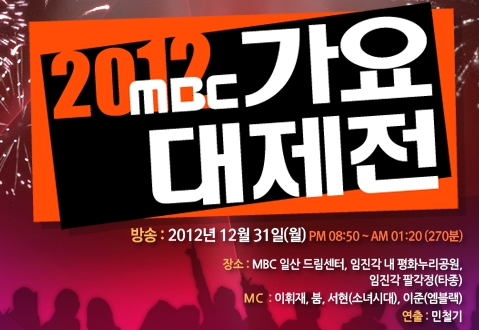 MBC intends to put on a spectacle for its “Gayo Daejun,” the year-end music festival show. According to reports in local news agencies, the station is preparing a star-studded line-up, as well as special collaborations and performances to close 2012.

Among the artists in the line-up released by MBC on Christmas Day are YG Entertainment artists Big Bang, 2NE1, Lee Hi and Epik High. The news excited fans since YG Entertainment has not been able to field artists to the MBC Gayo Daejun in recent years. In particular, 2NE1 and Lee Hi are to perform each other’s songs and collaborate on a performance.

“We do not confirm nor deny all the reports about the MBC Gayo Daejun, but compared to other broadcasters’ shows, we will have the majority of artists participating, which makes us the ultimate in year-end music festival shows,” an MBC official said in a statement.