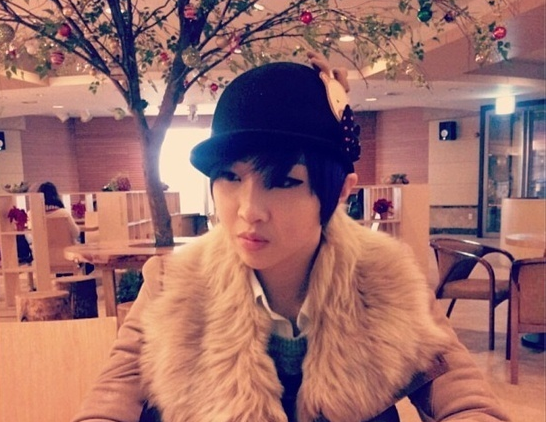 2NE1‘s Minzy revealed a feminine and posh image of herself as she sat at a cafe waiting for her drink.

Minzy seems deep in thought as she gazes off into the distance, allowing her trendy outerwear and adorable accessories to speak for her. She uploaded the photo to her twitter account on December 27, with the brief caption, “Pray,” leaving netizens wondering what it could mean. Perhaps she had taken a stroll to the nearest cafe to give thanks and reflect on everything that has happened to 2NE1 so far this year. Regardless, fans admired Minzy’s gradually maturing taste in clothes as the youngest member of 2NE1. Especially with her white collared blouse and sweater underneath, Minzy exuded a refined and sophisticated aura about her.

Netizens who caught glimpse of Minzy’s feminine picture remarked, “Wow, you look so pretty Minzy!” “I find you so adorable,” and “I just want to tell you that I really love you.”

In related news, 2NE1 recently wrapped up their world tour by stopping by New Jersey. In order to add to their accolades, 2NE1 was recognized by New York Times for giving the “Best Concert in 2012” in regards to their world tour. Critics at the “New York Times” wrote, “A concert is always more than just a rendering of songs. It is a musical revamp, a real-time test, a spectacle, a pop-up community, perhaps a dance party or an incipient riot — and, even in the YouTube era, and an ephemeral, site-specific experience.” Big Bang was among other artists and artist groups recognized for this category.