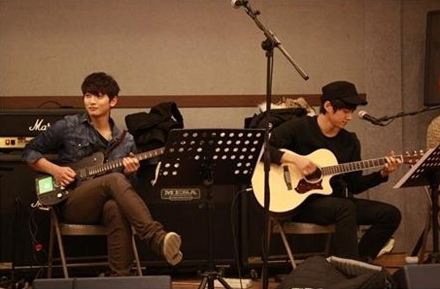 What do you get when you combine a few members of 2AM, SHINee, Infinite, CNBlue and B1A4? A fantastic collaboration showcasing their hidden talents!

A representative from KBS shared, “Many idol groups received a lot of love throughout the world this year. We have prepared a special performance for this year with idol members called ‘Idol Super Band.’”

“Idol Super Band” consisted of 2AM’s Jinwoon and Infinite’s L on the guitar, SHINee’s Taemin on the keyboard, CNBlue’s Minhyuk on the drums and B1A4’s Jinyoung on the bass. SHINee’s Jonghyun, Beast’s Yoseob and 2AM’s Changmin will be the vocalists for this fantastic band.

The new band arranged pop music from the 90s and played the instruments live, creating much excitement for every fandom. It’s been revealed that the members have been diligently working on various arrangements to provide the best possible performance.

The 2012 KBS Gayo Daejun (Music Festival) was broadcast live on December 28 at 8:50pm (KST). Check out the rest of the performances from the event here.