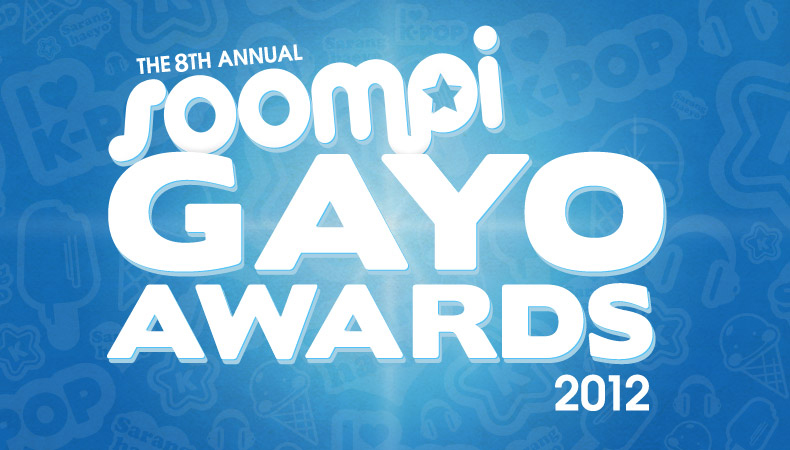 Ladies and Gentlemen, this is the moment you have been waiting for: the results of the 2012 Soompi Gayo Awards! This is already our eighth year hosting this event to recognize the top performers and songs in K-Pop this past year. Note that the complete results of the gayo awards will be broadcasted by our partner MYX TV in January. We will have the details on the air date soon.

Thanks to PSY’s “Gangnam Style,” K-Pop music was able to jump into the next level of worldwide popularity. As PSY has previously mentioned, there are so many hard working artists in K-Pop that he is glad to ride along this “hallyu” wave which grows bigger each day. 2012 was certainly an unforgettable year for K-Pop.

All the artists that were nominated for this year’s awards have achieved great successes throughout various charts in 2012. Since there are so many talented artists, many popular names are still left out in the end.

Let’s get right to the awards.

This award is scored based on 50% from our weekly music chart and 50% from our fan voting took place from December 19 to 27. The ten artists with the highest combined scores are named “2012 Top 10 Artists.” Here they are in alphabetical order:

Note that one of these 10 artists who has the highest combined chart and voting scores will be crowned “2012 Artist Of The Year”. We’ll save the announcement of this big award until the end.

No surprise here as PSY easily won the “Song Of The Year” award with “Gangnam Style.” This song spent six weeks on top of our chart, and of course, it went on to become the biggest international hit by a Korean artist. Its music video also became the most watched video on YouTube. Congratulations to PSY and to all the artists who made in into this year end top 50.

Three female soloists finished in the top three, not too surprising as Ailee, Juniel, and Lee Ha Yi are the only three rookies with No. 1 songs on our chart.

IU has won the top female solo award for the third consecutive year. Shewill have her hands full next year when the three female rookies above enter the competition.

It took K.Will the final week of the year to pass Psy and take home the top male singer award in a very tight battle. K.Will benefits from having six hit songs on our chart (I Hate Myself, I Need You, Love Is Crying, We Never Go Alone, You Are Love, and Please Don’t) to Psy’s one mega hit “Gangnam Style”.

A mild surprise here as T-Ara edged SISTAR for the top female group award. SISTAR had two No. 1 songs in “Alone” and “Loving U,” but T-Ara had five hits in the past year (Cry Cry, Lovey Dovey, Round And Round, Day By Day, and Sexy Love). Four of these five songs are top three hits. Plus we did not even count the collaboration T-Ara made with Davichi or else the score will not be so close. It is a very tough year for T-Ara especially during the summer with the Hwayoung controversy. Despite all the negative publicity, their hit songs were not really affected.

No contest here as Big Bang won easily. But perhaps the biggest shock is Teen Top taking second place. They are still relatively new, and perhaps only their fans realized how good a year they had. Teen Top has three hit songs in 2012 (Crazy, To You, and Be Ma Girl), all top five hits on our chart.

These are new awards this year given to the artists who won their respective categories in the voting. They are 100% soompiers’ choices.

Mini-Album Of The Year:

There are six songs on this mini-album and YG Entertainment made a smart choice naming each as a promoted title song. All six songs were simultaneously on our chart for several weeks, making this an easy choice for mini-album of the year.

Album Of The Year:

There are some debates on whether this is full or mini-album as it only have seven songs, but the record company call it a full album. Anyway, this is the only album of 2012 with two No. 1 songs (Alone and Loving U).

Artist Of The Year:

Big Bang was first place on chart score and third place on voting score. This gave them a score of 955 points out of 1000 to take home the grand prize: the 2012 Artist Of The Year Award. What a year for Big Bang as they won the top male group, top mini-album, chart champion, and artist of the year awards. Congratulations!

Here are the complete breakdown on the artist of the year scores among the top 10 artists:

I hope you will join us again next year for another edition of Soompi Gayo Awards. Congratulations to all the winners and Happy New Year to all our readers.