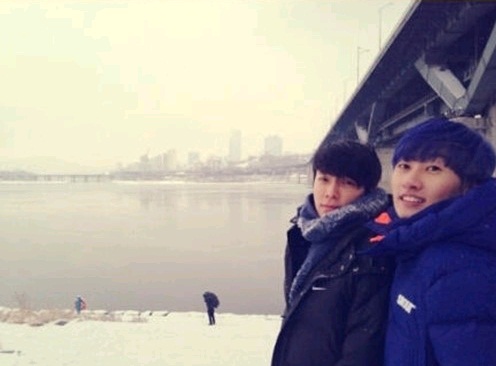 Super Junior members Donghae and Eunhyuk gave their New Year’s greetings in the snow by the Han River.

Eunhyuk put up several pictures on his Twitter on January 1 and wrote, “Happy New Year everyone! I hope 2013 is the best.” He also commented, “Brand new morning! It is finally the 2013 New Year. This is the first sun of 2013. Is the sun rising? Did it rise? It probably did.”

In the first picture Eunhyuk and Donghae are wearing thick winter jackets as they give the traditional New Year bow in the snow. The Han river and a bridge is right behind them. In other pictures smile for the camera and point at the sun that Eunhyuk was referring to.

Currently Eunhyuk and Donghae are the Super Junior representatives of the special group “SM the Performance” along with Minho and Taemin of SHINee, Lay and Kai of EXO-K, and Yunho of DBSK.