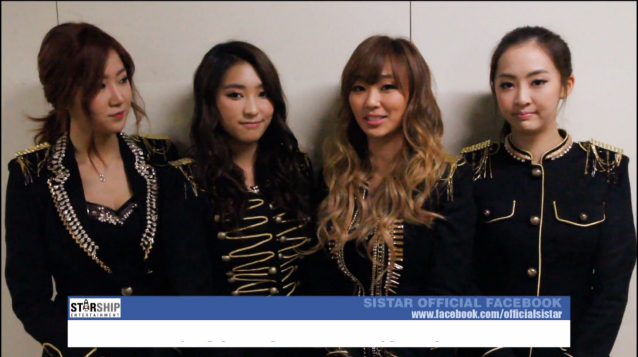 SISTAR, K.Will and Boyfriend Give Their New Year’s Greetings

Various artists from Starship Entertainment welcomed the new year with fans with a special greeting to fans on YouTube.

“It was a hectic year. But with a new year of 2013 and the start of a fresh and brand new heart ,meaning, and always a healthy mind, we will continue to work hard to present to you guys our new looks. We wish everyone for happy and good things to come in the new year of 2013. Please anticipate our new appearances in 2013. Until now, this was SISTAR! Thank you!”

Recently, the girls gave a ‘sexy, rocker’ performance at the 2012 MBC Gayo Daejun on December 31.

“It is finally 2013, a new year. 2012 was filled with various events. Personally, I felt there were a lot of reviews. It was because of all your love that I was able to meet you with great songs. Please be sure to look forward to Part 2 of the third album that’s coming out soon. I wish everyone has a happy and memorable year. I will be back soon. Bye! Happy New Year.”

Boyfriend, sends out their new year’s greeting as well.

“I don’t know if you’ve all made plans for the new year? We hope that you fulfill all of your plans and wishes for the new year of 2013. Always be healthy and happy. Also, we, Boyfriend, will come back with a greater look in 2013, so please anticipate that and ask for much love. We wish you guys a blessed year! Please keep supporting Boyfriend! Happy New Year!”

Recently, the boys appeared at the 2012 SBS Gayo Daejun on December 29. They are currently receiving lots of popularity after releasing their album and performing in Japan.