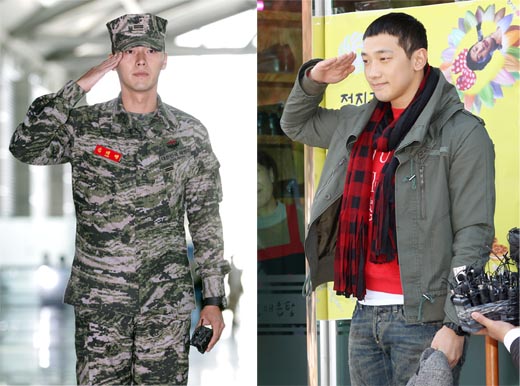 Hyun Bin’s Popularity Goes Up while Rain’s Goes Down

Hyun Bin’s commendable military service has been praised by his fellow marines and the Marine Corps officials.

A man who served with Hyun Bin during his military service said in a TV report, “Kim Tae Pyung [Hyun Bin’s real name] did not use all of his vacation days before he was discharged.” The man continued, “Hyun Bin probably had less vacation days than the average citizen. He would return even on days he had off for his promotional events. In many ways, his commendable military life was an inspiration to other soldiers.”

Hyun Bin was enlisted on March 7, 2011, and released on December 6 of last year. During his service he was awarded the Secretary of Defense Award and the Marine Corps Commandant Commendation for his excellent work while in serving in the military.

A Marines Corps official praised the actor. “Although he is a top star he worked very hard without any special treatment or training. We would like to give him this award for his faithful military service.”

As Hyun Bin is being recognized for his excellent service, comparisons are being made with the currently enlisted singer Rain, whose relationship with actress Kim Tae Hee has recently become public.