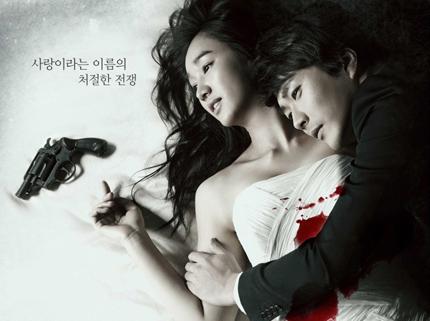 SBS’s newest drama “Night King” revealed two posters that are as intense and dramatic as the drama promises to be.

On January 7, Verdi Media revealed two different posters of the drama that will air next week on January 14. The first poster is of the two main actors, Kwon Sang Woo and Soo Ae, and the second is with the full main cast, including DBSK’s Jung Yunho.

In the first poster the main leads lie together with Kwon Sang Woo’s arm draped protectively over Soo Ae. A gun is lying near Soo Ae’s hand, and the two are covered in blood.

This poster raises more questions than it gives us answers. The ambiguous expressions of the two actors give no clue to the nature of their relationship. We can only wonder where the source of the blood is from, and whether the gun near Soo Ae had anything to do with it.

Also on the poster is the mysterious sentence, “Love is the name of this bloody war.” In the drama, Soo Ae plays a poor woman who dreams of becoming the first lady, and the man she loved, Kwon Sang Woo, dreams of revenge.

In the second poster, Kwon Sang Woo and Soo Ae are joined by the rest of the main cast, Kim Sung Ryung, Jung Yunho, and Go Joon Hee. Everyone hold serious expressions but it is Kwon Sang Woo’ and his teary but steely eyes that takes the spotlight.