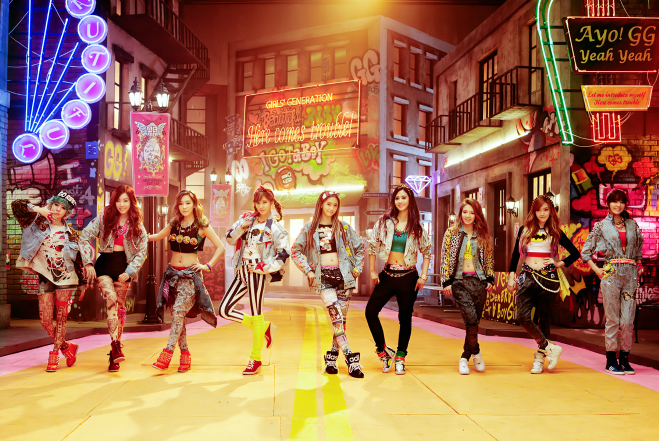 Girls’ Generation, who has made their come back on January 1 with their fourth official album, “I Got A Boy,” has generally brought in positive reviews and high acclaim. However, there are others who seem to think otherwise.

While some praised Girls’ Generation for bringing a new sound into the K-Pop scene and creating a new image with a strong and powerful concept, others expressed their distaste for the new track, claiming that it’s too complicated and unfamiliar.

On January 8, Girls’ Generation held a press conference and spoke about many things including their personal goals, dating rumors and even their thoughts on Wonder Girls’ Sunye’s marriage.

The girls admitted that in the beginning, they felt the same way as the people who thought the track sounded unfamiliar.

Seohyun said, “We weren’t used this new genre and things like the tempo change so we didn’t really have an idea of the song structure. I think it’s because the track is not a hook song, which is easily caught by the ears,” and “But the more you listen to the song, the more you will discover fun and interesting aspects to it. The members also said that the song got better after the hundredth time rather than the first time.”

Leader Taeyeon said that the group will gladly accept the mixed reviews of the song and will keep it in mind for the future development of the team. She said, “Because of the current trends and because of the certain image we wanted to try out, even if this isn’t our original style, we hope people will think, ‘So this is also a Girls’ Generation’s style.’ But this doesn’t mean that the Girls’ Generation from ‘Kissing You‘ has disappeared.”

Seohyun also added, “When we debuted, we wore sneakers and performed music that fit our teenage image. During our early twenties, we wore white t-shirts and jeans to emphasize youth. We wanted to keep maturing and developing our music.”

Tiffany also said, “I think the music that fits our age range fits our image right now. Rather than calling it a change, we hope you will view it as a natural transformation and growth.”

The girls also said that they were surprised when the public stated that their choreography changed. Taeyeon said, “It’s not a new type of choreography. This is what we’ve been practicing and learning since before our debut. Through this choreography, we all reminisced our trainee days and that’s why it was more fun. It is a bit intense but we’ve been doing this sort of dance since we were young so it was actually comfortable and fun to do.”

Taeyeon continued, “The main focus isn’t on the choreography itself but the acting and our chemistry is more important. So although we performed several different times, each time was different. We even had to push back our music video shooting to practice our dance more. It wasn’t enough to just memorize the dance moves. We needed to understand the story of the song. Since it was our first come back in a while, we were more forward with our practicing. Since the style of the song isn’t really tightly bound with rules and boundaries, we went for a more ‘musical-like’ style. So we had to edit and change the choreography and the track itself several times.”

Yuri stated, “At first, we were a bit taken back. The dance was really different from what we’ve been doing for a long time. We were worried if the nine of us could really express the song well. However, since the dance was so similar to what we’ve practiced during our trainees days, we had so much fun. We really wanted to pull it off well so we even asked for more practice time. Since it feels like we’re acting out a scene from a musical, every time we stand on stage these days, it’s so much fun and it’s interesting to see how each of us changes for each performance.”

Tiffany shared how she is feeling physical pain due to the power dance moves. “The song itself is very long and since we dance for a long time… and since we only danced ‘pretty’ dances in the past, this track is taking a physical toll on us. It’s to the point where we have to take 20 minute breaks after practicing the entire song once. Even the staff members say that they feel like they are losing weight just by looking at us. I think even male groups would have a hard time with our dance. But we felt our bodies strengthening after our come back. I think we found even more energy through this choreography.”

The girls also spoke about the pressure to change their image each time they make a come back. Hyoyeon said, “It’s not too bad but we do have a bit of pressure. We worry that our new image won’t fulfill the expectations of the public.” Tiffany added that the pressure isn’t so bad but it does motivate them to work harder.

Finally, Yuri remarked, “We do have a fear of trying new things. We’re not afraid of being compared with other girl groups but we do have pressure to show a more mature and developed image from our last album. We want to show a better image of ourselves. We really hope that people won’t view us as strange and unfamiliar but as a group that can pull off a variety of concepts and styles. Each time a new album is released, we are scared and anxious and burdened but it’s not like our growth and maturity is based off solely the public’s recognition. Just by the process of our preparations and practices alone makes us proud and thankful and joyful.”