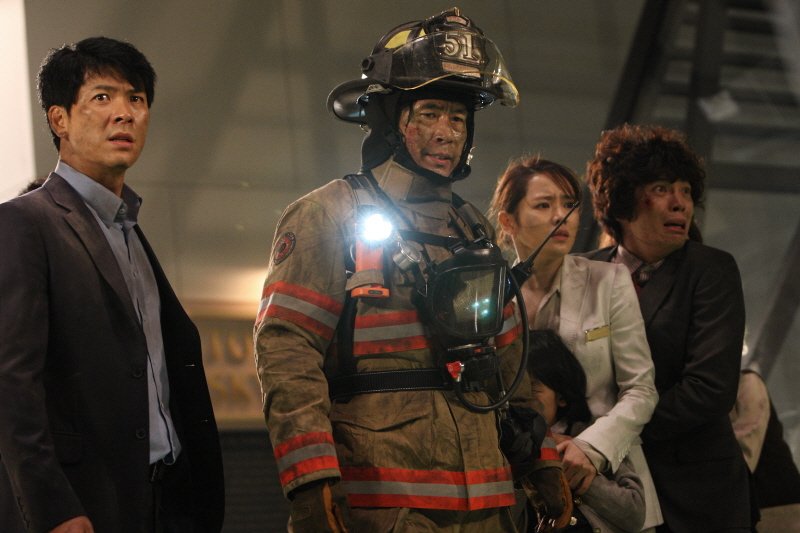 The Tower, a big budget South Korean disaster epic detailing the unfortunate demise of a 108-story ultra-luxurious building complex in the heart of Seoul named Tower Sky, hits particularly close to the heart with its surprisingly heart-tugging emotional backstories and eye-popping visuals. Director Kim Ji Hoon, whose previous films included Sector 7 and May 18, mentions that The Tower is partially inspired by the 1974 film The Towering Inferno, as well as real life footage of the September 11 attacks on the World Trade Center in New York. Kim, who was supposedly struck by images of the heroic actions of the firefighters on the news in 2001, pays homage to these real life heroes, and strives to recreate these touching scenes in The Tower, once again successfully redefining the genre of South Korean disaster epic films.

One notable and unforgettable lesson learned from The Tower: ordinary individuals can become heroes in the face of danger. The film draws upon experiences from characters of different social stature and assemble the characters together in an unconventional team. The characters’ sacrifices and their eventual realization and acceptance of their own impending deaths in the inferno brings about a new level of maturity that leads to acts of heroism and bravery.

Residents and employees trapped inside the Tower Sky

The beginning of the film serves mainly as the juxtaposition of the living habits of the incredibly wealthy residents and the average employees of Tower Sky. The film’s ultimate moral decision was presented when the ambitious building owner (Cha In Pyo) chooses to pick extravagance over safety: despite knowing problems existed with the sprinkler system within the building, he demands all resources to be instead focused on the upcoming Christmas Eve party. This act of recklessness eventually became the source of the tragic fire that traps the residents and employees alike. As the fire broke out, several key characters fight for survival while awaiting help that may never come in time. Among the trapped are Lee Daeho (Kim Sang Kyung), Tower Sky’s manager and a single father who rushes back into the flames in order to search for his daughter Hana (Cho Mina); Seo Yoonhee (Son Ye Jin), the building’s restaurant manager and Daeho’s romantic interest; and Yoido Station’s legendary fire chief Kang Young Kee (Sul Jyung Gu), who once again chose to forgo Christmas plans with his wife due to his dedication to his job. Together, these individuals struggle to survive and escape the collapsing building before it is too late.

The highlight of the film comes directly from the action-packed sequences and the extremely realistic depiction of the fire (and the resulting catastrophes) – the editing crew did a phenomenal job with making these scenes as genuine looking as possible. Also, as an additional bonus, sprinkled throughout the film are moments in which the mood are unexpectedly light-hearted; Lee Han Wie, who has in the past appeared in a multitude of dramas, including Baker King and Coffee Prince, once again reprises his usual simple-minded character personality as a Tower Sky resident Mr. Kim, and You’re Beautiful’s Kim In Kwon role as fellow firefighter Oh Byung Man further adds to the impeccable timing of the comic relief present in the film.

Overall, The Tower presents an unforgettable story about courage, love, and the search for morality. If you have time, be sure to check out The Tower, now in select North American theaters.