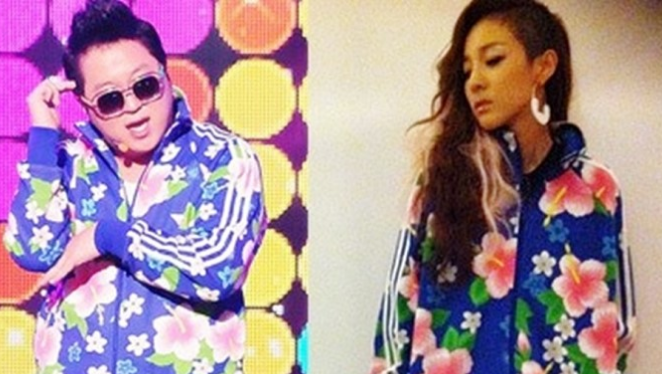 Who Wore It Better: Jung Hyung Don vs. 2NE1’s Sandara

Jung Hyung Don wore the outfit during a performance for MBC’s “Music Core,” where he performed “Gangbuk’s Fancy Guy,” last week. He matched his tracksuit with a white tee and sunglasses and zipped up the jacket as to emphasize his round belly. Overall, Jung Hyung Don gave off a funny and comedic look.

Sandara shared her floral look several months ago on her Twitter. However, the singer made the look funky and trendy with her accessories and poise.

Those who’ve seen the photos commented, “Jung Hyung Don is so funny,” “I would have never imagined that it was the same tracksuit. The way they wore it was so different,” “It looks like Jung Hyung Don is about to burst,” and more.