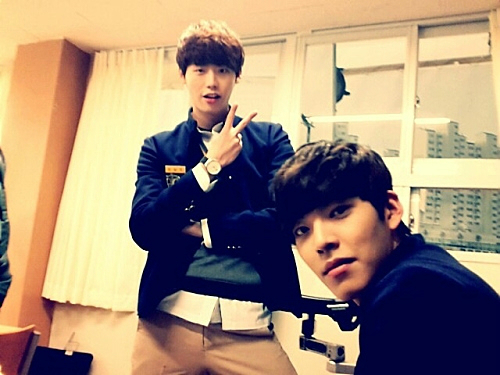 On January 16 Lee Jong Suk put up a picture with Kim Woo Bin. He also spoke about his feelings regarding how his appearance in a 2NE1 music video made some waves throughout the K-Entertainment universe.

Lee Jong Suk wrote, “Today a music video from 3 years ago came up. People are making fun of me. I’m embarrassed… But don’t forget. I am a tsunami. And next to me is Park Heung Soo.”

The music video he appeared in is 2NE1’s “I Don’t Care.” In the music video he comes out as a player and in Korean the word for that is “Wind Boy.” It appears as though he is making a reference to that by calling himself a tsunami.

(Correction: It looks like he is tsunami because that is his character’s nickname from the show. I still don’t think it’s witty. Also, thank you for calling my article amateurish �de42

The translated article then goes on to say that Lee Jong Suk was very “witty,” that the picture shows his friendship with Kim Woo Bin, and goes on about Netizens and their reactions.

In a drinking setting I think what Lee Jong Suk said would have been funny. But I’d probably need a few bottles of soju in me. In my sober mind, I don’t think it’s “witty” per say.

I wish that Korean celebrities would figure out other ways to promote themselves. Why not just say, “Hey I’m promoting the drama I’m appearing in, please check it out!”

But, I get it. I bet he’d be a bit annoyed that people are teasing him about his appearance in the music video because he does look kind of goofy.