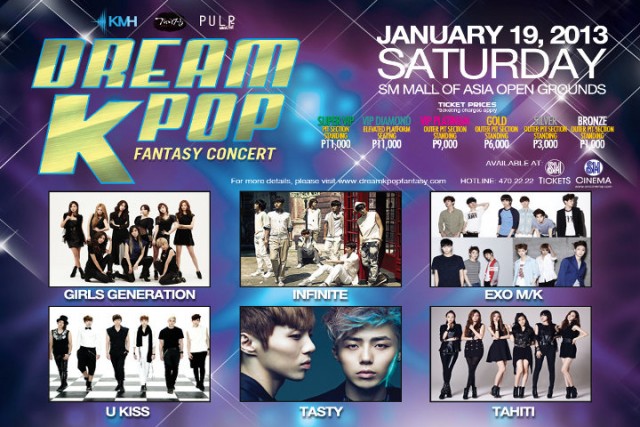 “Dream K-Pop Fantasy Concert” in Manila: A Night of Firsts and Promises

Some of K-Pop’s finest graced the Manila concert scene for a milestone “Dream K-Pop Fantasy Concert,” bringing with it a series of firsts and promises. Not counting U-KISS, the concert was the first time for all the performers of the evening, namely Girls’ Generation, INFINITE, EXO, Tasty and Tahiti to meet their fans in the Philippines. Latest hits, new songs, new promotions and covers paraded in the evening, with all the groups expressing a hope to return to do more shows and meet more of their Filipino fans.

“Dream K-Pop Fantasy Concert” marked the first overseas live performance of Girls’ Generation’s latest hits, their fourth full Korean album’s “Dancing Queen” and title track, “I Got a Boy.” As the most senior group present, the Girls served as finale act. Along with their current hits, Girls’ Generation also performed “Genie,” “The Boys,” “Hoot” and “Gee.”

Jessica, who, for her “Romantic Fantasy” solo performance sang “Someday” indulged the request for a few lines with the fans singing along. “Someday” is written by Filipino singer-songwriter Nyoy Volante.

INFINITE opened the evening’s K-Pop explosion, performing six of their hits. The group, who said they had no idea how popular they are in the Philippines, got to experience the warmth of their Filipino fans. The boys opened the show with their hit single of 2012, “The Chaser.” They also sang some of their previous singles, including “Paradise,“ a follow-up single to “The Chaser, “In the Summer,”“BTD,”“Be Mine” and “Nothing’s Over.”

Tasty performed “Solo,” a new song from their solo album, in addition to their debut single “Spectrum.” They delighted the crowd by looking for twins in the audience.

Tasty performed “Solo,” a new song from their solo album, in addition to their debut single “Spectrum.” They delighted the crowd by looking for twins in the audience.

Tahiti pumped up their overseas debut with three of their songs, “Tonight,” “Hasta Luego,” and “Pretty Face” and threw in a lively cover of the Spice Girls’ “Wannabe” and current global YouTube phenomenon PSY‘s “Gangnam Style.”

Tahiti pumped up their overseas debut with three of their songs, “Tonight,” “Hasta Luego,” and “Pretty Face” and threw in a lively cover of the Spice Girls’ “Wannabe” and current global YouTube phenomenon PSY‘s “Gangnam Style.”

U-KISS excited their fans with more than their performance. The group announced their soon-to-come third Korean album, with the possibility of member AJ coming back to join them for it. As long-time and repeat visitors to the Philippines, they said AJ is the one who wanted to come the most and that they’re very fond of the tropical weather. The group performed two of their recent singles, “Believe” and “Stop Girl,” along with some of their older hits including “Bingeul Bingeul,” “Man Man Ha Ni,” and “Shut Up!”

EXO‘s special treat for their first meeting with Filipino fans was their rendition of “Hawak Kamay,” a song in the local language by Yeng Constantino. EXO-K came out with another cover, “Open Arms,” a Journey original made popular again by Mariah Carey. EXO-M sang “Two Moons.” Both sub-units came together for “MAMA” and “History.”

“Dream K-Pop Fantasy Concert” in Manila came with pre-events that included a cover dance contest. The winners took to the stage as the concert’s front act, pumping up the crowds and getting the entire show of six groups to clock in at nearly four hours with breaks. For fans present, though, the energy remained high and everyone is counting on each of the group’s promise of more in the future.

Are there Soompiers who came to join the fun in “Dream K-Pop Fantasy Concert?” Share with us your favorite moments!