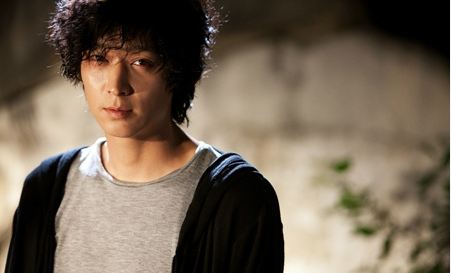 Kang Dong Won finished his military service a little over a month ago and besides a little peep here and there, the actor has been relatively quiet as he works on his next movie project “Band of Thieves.” But while the fans patiently wait for his movie to be released in theaters, couple pictures of the handsome man have been captured to help ease the long wait.

On January 21, columnist Shim Woo Chan wrote on her twitter “His impossible beauty cannot be compared to anyone nor anything on this earth. The one who scorched the collection- Kang Dong Won.” She also included several pictures of the scorching-hot man on her social networking site.

The first two pictures show Kang Dong Won waiting for the collection to start while the third captures him in a mysterious, fleeting light.

The columnist continued, “Even though celebrities and fashion insiders, the creme de la creme from around the world, are in attendance, his aura shines the brightest- Korea’s actor Kang Dong Won! His long stature and deep fashion sense attracted even those who didn’t know his name to ask so they could jot it down on their notes.”

Kang Dong Won
KPLG
How does this article make you feel?