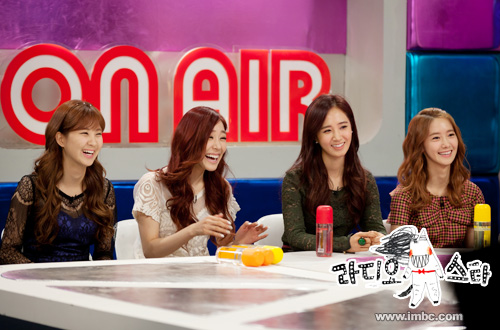 Kyuhyun Reveals that Seohyun Is His Ideal Type of Girl

Super Junior member Kyuhyun, announced that Girls’ Generation‘s Seohyun is the closest to his ideal type of girl.

On the January 23 episode of the MBC’s variety show, “Golden Fishery – Radio Star,” one of the emcees asked Kyuhyun an unexpected question causing the audience to listen attentively, “Who did you date among the Girls’ Generation members?”

The girls looked puzzled but MC Yoon Jong Shin again teased Kyuhyun by adding, ”When I drank a beer with Kyuhyun one day, he talked about Seohyun.”

In this regard, Kyuhyun explained, “People ask a lot of questions about Girls’ Generation to me. But really, they are just like my little sisters. But if you ask who my ideal girl type would have to be among Girls’ Generation, Seohyun is the one.”

Meanwhile, the girls talked about many other things during this episode such as Sooyoung‘s scandal with Won Bin, Seohyun’s airport blacklist story and Jessica‘s headbanging controversy.