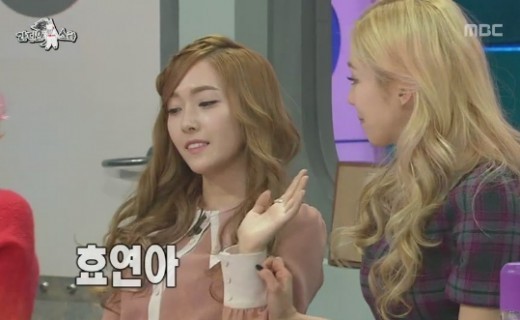 On January 23, all nine members of Girls’ Generation were guests on the MBC talk show, “Radio Star,” where each of the girls shared various stories and discussions.

Hyoyeon started off by putting Jessica on the spot by saying, “Jessica does this thing where she half-heartedly dances to powerful choreography.”

It seems like Hyoyeon mentioned this because of the recent controversy that spread online about Jessica’s “lack of enthusiasm” on stage. A certain netizen made some captures of Girls’ Generation’s “I Got A Boy” performance, which showed Jessica being the only one who didn’t head-bang as strongly as the others.

At that moment, Jessica playfully shot back, “Hey Hyoyeon, I had a headache that day, okay?” This caused the entire studio to erupt in laughter.

Then Hyoyeon ended the topic by saying, “I think Jessica will look so cool if she does the dance properly.”

Kudos to Jessica for being so chic and cool!