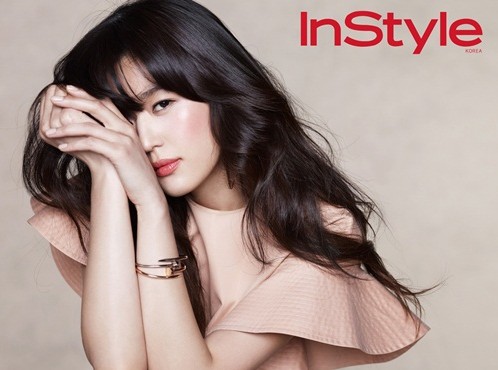 Jeon Ji Hyun perfectly pulled off the retro look in the photo shoot. Eyes were especially drawn to her fantastic body line and beauty. It was reported that the photo shoot staff couldn’t stop expressing their awe due to her experienced poses and professionalism.

The actress had an amazing year due to the great success of “The Thieves” and the currently ongoing film, “Berlin.”

After the photo shoot, Jeon Ji Hyun sat down for an interview and said, “Ryun Jung Hee (from the movie Berlin) has a lot of scars. She doesn’t have many lines and she’s a very restrained character. It was very important to express her eyes and face. I tried to think of the really bad things on the news when I was acting.”

She also spoke about her marriage and said, “I think I became a step more mature as a woman through marriage. I think my marriage helped me act out my character in ‘Berlin,’ since she is a scarred housewife. My acting pattern definitely changed after I got married. I think I express myself with less constraint.”

This photo shoot and interview of Jeon Ji Hyun can be found in the March edition of “InStyle.”

InStyle
Berlin
KPLG
Jeon Ji Hyun
How does this article make you feel?