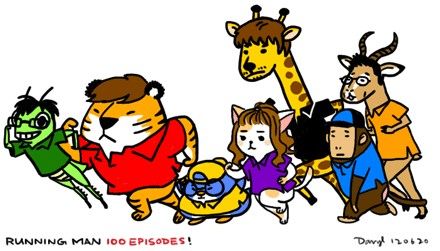 If the “Running Man” members were animals, what they would be?

The animalization of the “Running Man” members became an interesting topic of discussion.

Recently, there was a picture uploaded online with the title, “Animalization of “Running Man,” don’t they look like them?”
The revealed picture showed which animal each of the “Running Man” members would be if they were an animal. Yoo Jae Suk was drawn as a grasshopper, Kim Jong Kook a tiger, Lee Kwang Soo a giraffe, Ji Suk Jin an impala, Song Ji Hyo a cat, Haha a penguin and Gary was drawn as a monkey. The humorous animation of the characters portrayed each of the member’s distinctive physical features and common traits.

Netizens enjoyed the pictures and wrote, “They really do match with members,” “Running Man animals are funny..I love the giraffe,” “Just too funny looking at them” and “I want to keep them.”