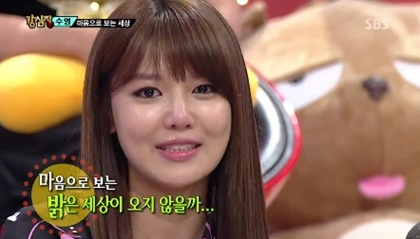 Sooyoung Sheds Tears While Talking About Her Father’s Decreasing Eyesight

Girls’ Generation’s Sooyoung shares for the first time about her father’s health on public television.

On February 12, she appeared on SBS’s variety talk show “Strong Heart” along with the rest of Girls’ Generation.

“Not too long ago, Girls’ Generation attended an event for those eradicating eye disease,” Sooyoung said. “To be honest, my father’s in charge of the campaign to eradicate vision loss.”

She went on, “His eyesight is quickly aging. That’s why he visited a hospital and received a diagnosis that he has a retinal disease. It’s called ‘pigmentary degeneration of the retina’ and sunbae Lee Dong Woo also has the disease. My father doesn’t have any problems with everyday life and he has a strong will. That’s why, he became interested in various treatment methods and wanted to share the information regarding the disease with the Korean public because it’s mostly written in English. That’s how he started and now he’s the chairman of the organization.”

Afterwards, MC Shin Dong Yup shared, “Lee Dong Woo continued on with his promotional activities as his eyesight deteriorated. Since he’s not able to see, he would make some mistakes while reading a script during a radio broadcast and wouldn’t greet others. A lot of people misunderstood him as someone who has become arrogant.”