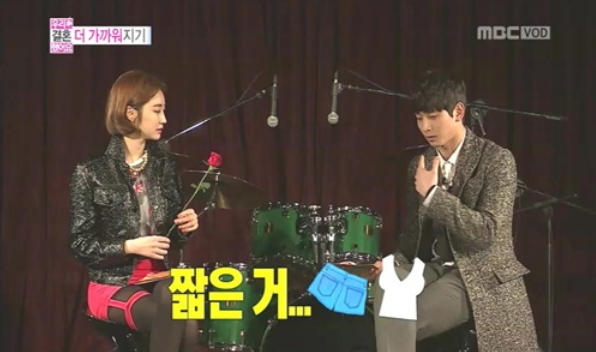 On the recent episode of MBC’s “We Got Married” that aired on February 16, Jinwoon and Go Jun Hee continued to learn about each other.

During their conversation, Go Jun Hee asked, “Do you have anything that you wouldn’t want your girlfriend to do?”

Jinwoon answered without hesitation, “Short clothes.” He continued, “I hate anything short like shorts, sleeveless shirts, and mini-skirts. I understand that women like to wear them because they want to look nice, but I still don’t like it.”

This was an unfortunate statement since Go Jun Hee specially wore a red mini-skirt because she wanted to look great for Jinwoon. As Jinwoon continued to explain how much he hates sexy outfits, Go Jun Hee’s expression became rigid.

Finally, Go Jun Hee said unhappily but firmly, “But I like short skirts.”

It appeared that though both of them respected each others’ opinions, they still were not willing to give up on their own preferences.

Jeong Jinwoon
2AM
We Got Married
KPLG
Go Jun Hee
How does this article make you feel?