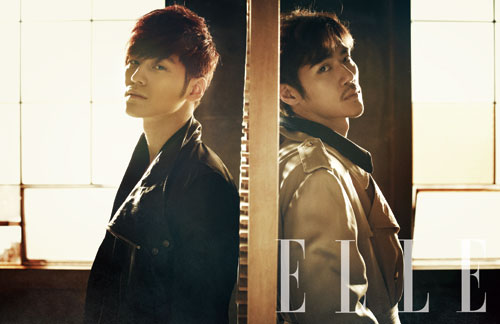 Co-stars for “Psychometry,” Kim Bum and Kim Kang Woo have gotten together for a charismatic photo shoot and interview for “Elle” magazine.

In the revealed photo, the two handsome men are intensely gazing at the camera with a yellow sunset as their background, which makes the photo seem almost like a still cut from a film.

Kim Bum spoke about the challenge of playing a new role in the upcoming film. He said, “I’m not really afraid of a challenge or a change.”

He continued, “There are many fans who are waiting for me to be in a melodrama but I’m not very good at saying those cringe-worthy lines and I haven’t really met the chance to work on a melodrama yet. Instead, I will work hard at my ‘couple bickering’ scenes in ‘That Winter The Wind Blows.'”

He continued, “Because the topic of the film was so foreign to me, I tried to build up the character’s history first.”

The full photo shoot and interview can be found in the March edition of “Elle” magazine.

Previously, Kim Bum and Kim Kang Woo attended a “touch” event for the film where the two actors walked through a crowd of fans, allowing the fans to touch them.