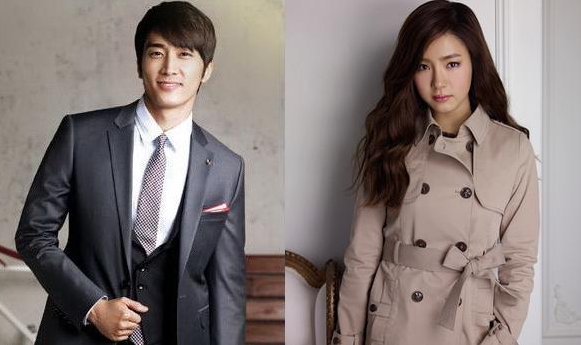 Upcoming drama “When a Man’s in Love” released new photos from its first script reading.

Ahead of the reading, screenwriter Kim Yin Young expressed, “This is my eleventh mini-series. Over the years, I have participated in a lot of script readings. However, it’s been a long time since I felt such a positive energy and excitement. Because we have the best crew and a great cast, I can’t give up on the ratings. I will put in my heart and soul to writing a great script, so please immerse yourself on site.”

Once the reading started, each of the actors put on their game face and practiced like they were filming. It’s been said that lead actor Song Seung Heon impressed his fellow cast with his calm voice and charisma. Shin Se Kyung also charmed others with her expressive reading and facial expressions.

“When a Man’s in Love” is described as a melodrama about a forty-year-old man (Song Seung Heon) who is in love with his deceased boss’s woman. However, he falls in love again with another young woman (Shin Se Kyung) in her twenties. The series will replace Choi Kang Hee and Joo Won’s “Level 7 Civil Servant” on MBC this April.

Shin Se Kyung
KPLG
Song Seung Heon
Level 7 Civil Servant
When a Man's in Love
How does this article make you feel?