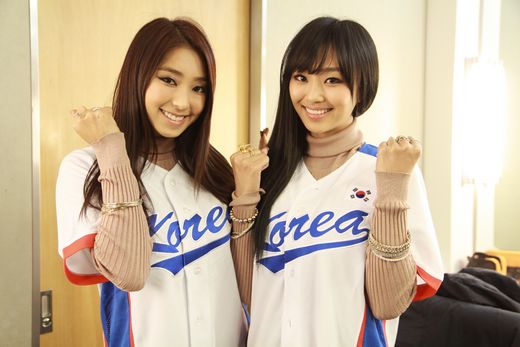 SISTAR19’s “Gone Not Around Any Longer” remains No. 1 for the third consecutive week. This song is still reporting a very high score of 987 points. Next week they will face very strong challengers not only from the No. 2 and 3 songs but also SHINee’s “Dream Girl” which debuts at No. 11 this week and is poised to make a big move.

Huh Gak’s “1440” moves up two spots to a distant No. 2 as it is nearly 150 points behind the No. 1 song. However, it became Huh Gak’s biggest hit on our chart so it is no small accomplishment.

At No.3 it is one of the two new songs in the top 10. Seven-member girl group Rainbow returns to the top 10 in a big way, moving up a big 21 spot to the top three with the title song “Tell Me Tell Me” from part 1 of their first full length album “Rainbow Syndrome”. This is a colorful pop dance hit that fits the image of Rainbow. It is the group’s first Korean release in one and a half year. Despite the long layoff, they don’t seem to miss a beat.

The other new song in the top 10 is at No.7. One of last year’s top rookie group B.A.P is back with their second mini-album “One Shot”. The title song of the same name moves up 14 spots this week to No. 7. “One Shot” holds lyrics about trying one’s best and always seizing the day. The song starts off with orchestral accompaniment followed by sounds that are expected to ring listeners’ hearts.