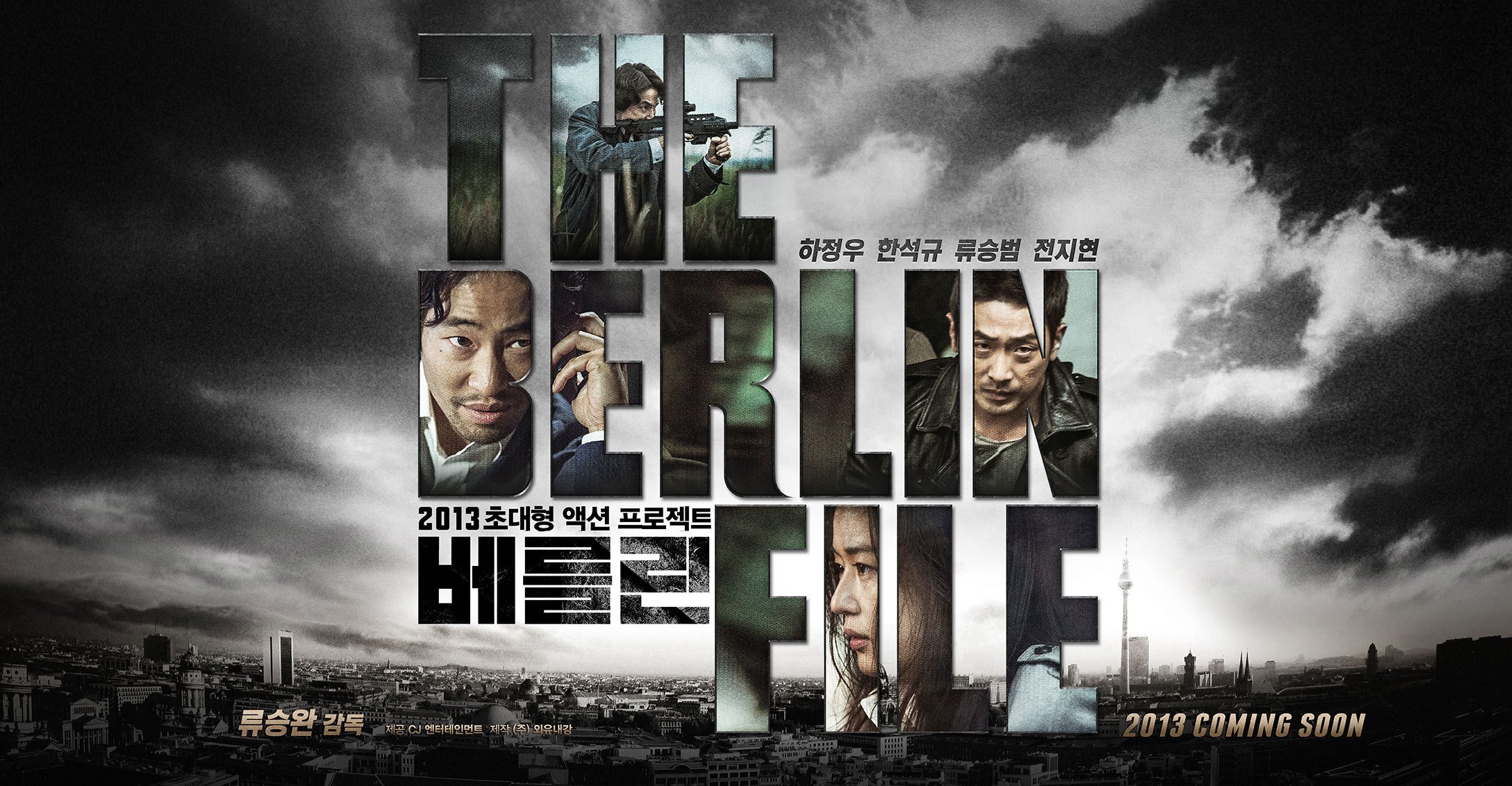 After I saw Won Bin‘s Man from Nowhere, the thought occurred to me that a prequel set during his character’s time as an active South Korean intelligence operative engaged in white and black ops might be a good investment for the studio. Well, The Berlin File (베를린) is not that movie. Rather, it is centered on a North Korean agent, Pyo Jong-seong (Ha Jung-woo), whose function is to execute operations and provide security for the North Korean embassy in Berlin, as well as monitor embassy personnel, especially the ambassador. He is a “commie,” as he is referred to by the South Korean agent in pursuit of him. For people who are relics of the Cold War like that agent, Pyo would seem to be an unlikely hero.

The movie begins with negotiations taking place between Pyo, representing North Korea, and a Russian arms dealer and the leader of the “Anti-Imperialist Arab League.” The meeting is interrupted when men claiming to be part of the Israeli intelligence agency Mossad attack the location. Afterwards, Pyo surmises that there must have been a leak about the meeting, possibly coming from within the embassy. Pyo does his duty and begins to search for the source of the leak. The ambassador and even Pyo’s wife, Ryeon Jung-hee (Gianna Jeon Ji-hyun), who works as a translator for the embassy, come under suspicion.

We learn that the married couple has been having difficulties (the reason for the estrangement is revealed later in the movie), and Ryeon wishes to return to North Korea. Her possible involvement in complicates matters for Pyo, the “Republic’s hero.” He has to maintain an appearance of impartiality and loyalty to the state, as another North Korean agent, Dong Myung-soo (Ryu Seung-beom), has been dispatched to Berlin to discover who is leaking the info and also to scrutinize the embassy’s internal inquiry and Pyo’s handling of it. Pyo must also conduct his investigation even though he has attracted the attention of the South Koreans. South Korean intelligence agent Jung Jin-soo (Han Suk-kyu) is initially put on the scent of Pyo after he and his team surveil the meeting in an attempt to thwart a possible arms deal. For reasons that are obvious in the movie, he becomes very committed to catching Pyo. (I note that as the two men go about their missions, the contrast between the two Korean intelligence agencies with respect to “office politics” is rather interesting.)

Han Suk-kyu as Jung Jin-soo, on the hunt for Pyo.

A good spy action thriller needs to make its depiction of spycraft plausible to the viewer. Though the filmmakers may have good reasons to choose Berlin for filming, someone who watches the movie with a critical mind may find it difficult to believe that in real life, all the parties would choose to meet there, instead of a city in a country less accessible to their enemies. But this criticism probably applies to most movies of the genre – the exotic locale is the standard setting . Still, in other respects the movie tries too hard, especially in the beginning, when it puts the deadliness and skills of the characters on display in a way that is unnecessary to the storyline, violating what would seem to be an important rule of spies – avoiding detection by keeping a low profile. (I am thinking of Dong’s introduction in particular.) There are other details that might stand out to the viewer who has some familiarity with military and covert affairs in the real world as being outrageous preferences of style over substance – one minor example being the use of a short-barreled rifle as a sniper rifle. And the movie does not avoid overused clichés of the genre, such as the stereotype of the disheveled CIA agent with his wrinkled clothes. (This could be a joke on the part of the filmmaker, an homage to earlier films. Or it could actually be intended as an insult.)

Ryu Seung-beom as the ruthless Dong

Nonetheless, I found myself drawn into the story in spite of these weaknesses, which anyway might not be apparent to most people. It was not the investigative procedural that kept my attention but the characters and their relationships to one another. The movie does a good job of humanizing “the other side,” much like the movie JSA. The protagonist Pyo gains our sympathy as the good soldier who is doing his duty and carrying out orders, but has not lost human emotions and affections and loyalties. Having seen Jeon Ji-hyun in The Thieves, I was pleased by her playing a very different role in this movie, though it may seem incredible that someone who looks like her would be working as a lowly interpreter. Ha’s performance is somewhat mirrored by that of Han Suk-kyu, who does a good job as the tough and gruff South Korean operative possessing a heart along with spirit. (Perhaps the weakest performance is that of Ryu Seung-beom, who often seems more like a kkangpae than a seasoned spy and assassin, especially when he speaks English.)

Jeon Ji-hyun as the interpreter/wife

While the relationship between Pyo and his wife became the most important reason for me to continue watching, the movie also draws our attention to the relationships between Pyo and others, including the rivalry between him and Dong, whom Pyo trained, implying a depth to their personal histories that is not explicitly shown on-screen. I appreciated these details as well and I wanted to see how everything would play out in the end. The Berlin File shows that even as the South Korean film industry advances in the creation of Hollywood-style blockbusters, the long-standing focus on the personal remains one of its strengths.