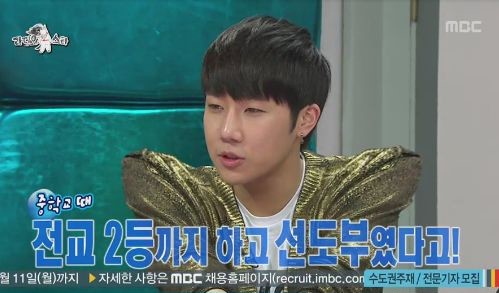 Infinite‘s Sungkyu has recently entered the status of being one of K-Pop’s “Um Chin Ah,” which literally translates to “mother’s friend’s son,” and is used to describe someone who excels in nearly everything.

On the episode of “Radio Star” that aired on March 6, Sungkyu was a guest along with Nancy Lang, Muzi and Sam Hammington. These guests were grouped together for their unique image on broadcast.

During the episode, the emcees stated, “Surprisingly, Sungkyu is sort of an ‘Um Chin Ah’ style,” and “He ranked #2 in middle school and was even part of the student council.”

Sungkyu proceeded to give a proud smile and said, “It’s true. I was even popular with the ladies back then.” Then the emcees playfully retaliated, “We never asked about girls,” which made Sungkyu put on a bewildered face.

The emcees then asked, “What type of work did you do in the student council?” Sungkyu answered, “The most important thing I’ve done was school uniform supervision.”

Previously, Sungkyu talked about his feelings for 4minute‘s HyunA as well as being hurt by fellow Infinite member L, regarding his solo album.