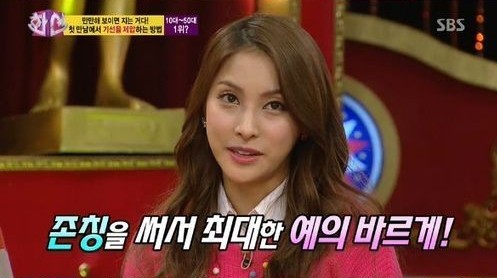 Kara‘s leader Park Gyuri shared a story about a rude junior girl group and how she kept them in line.

On the episode of “Hwa Shin” that aired on March 19, the guests and emcees started a discussion under the topic, “how to gain control over others at the first encounter.”

Gyuri started to share her story by saying, “When I was doing a radio show with Super Junior‘s Shindong oppa, a rookie girl group was the guest for the day. Usually, rookies will be filled with determination and passion so the atmosphere would be lively and warm. But this particular rookie girl group had no sincerity.”

When the others started to ask which girl group she was talking about, Gyuri did not answer. MC Shin Dong Yup asked, “Do they have four members?” but Gyuri did not reveal the girl group.

Gyuri continued her story as she said, “I got annoyed and thought ‘What is this?’ If the broadcast goes well, then it would be a plus for the juniors too but it wasn’t like that,” and “During our break, I seriously asked them who the leader is and how old they all were. They were all younger than me.”

Finally, Gyuri continued, “Then I started to talk in an attacking and aggressive manner to my manager on purpose. I acted like I was venting at my manager when I was angry at the girl group,” and “When it was time to go on air again, I acted sweet toward the juniors again. But it seemed like they were disciplined and they showed a better, more sincere attitude. Sometimes, I want to use this method toward other people when I see them.”

KARA
KPLG
Park Gyu Ri
Hwashin
How does this article make you feel?