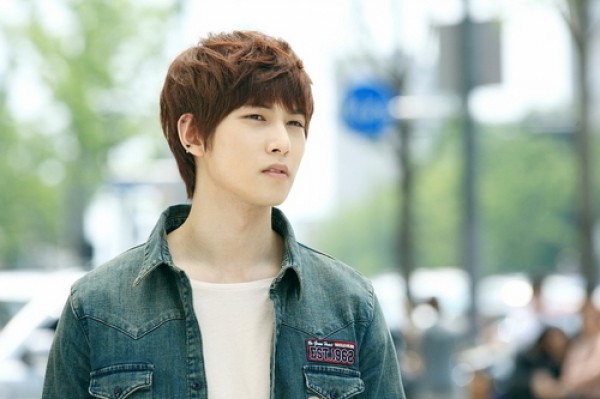 CNBlue‘s guitarist and vocalist Lee Jong Hyun recently attracted attention for his appearance in the popular Sunday variety “Running Man.” On the March 24 episode, Lee Jong Hyun was one of the guests along with his former “A Gentleman’s Dignity” co-star Kim Woo Bin, “School 2013” actor Lee Jong Suk and Min Hyo Rin. During the course of the episode, the guest stars appeared in school uniforms, with viewers and netizens paying particular close attention to the CNBlue member.

A screen capture of Lee Jong Hyun while waiting for a game to start circulated the Internet through online community boards. In it, he displays his tall good looks and immaculate skin, long lashes and the straight line of his nose. The photo earned comments from netizens such as “He looks handsome in uniform,” “His face is so chiseled,” and other compliments.

The episode was Lee Jong Hyun’s third time to appear on “Running Man.” Previously, during the Winter Olympic special with other idols that aired in January, Lee Jong Hyun has attracted attention for his gentlemanly manners, as he offered himself as backrest for f(x)‘s Sulli, who was wearing heavy hockey gear.

Meanwhile, Lee Jong Hyun and the rest of CNBlue are gearing up for their “Blue Moon World Tour 2013” that kicks off in Taiwan in April.