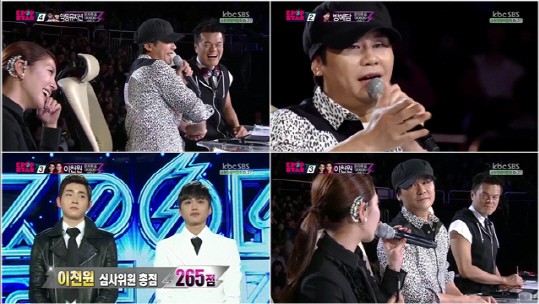 It’s no longer a competition just between the contestants; JYP, SM, and YG are also putting their names on the line as they prepare for the semi-final round of SBS’ popular survival audition show, “K-Pop Star Season 2.”

It was a tight battle between the Top 4 competitors (2000 Won, Akdong Musician, Andrew Choi, and Bang Ye Dam) in the latest episode that aired March 24, as each artist performed covers produced by the show’s participating entertainment companies. Andrew Choi and Akdong Musician’s stages were both produced by SM, while YG and JYP each produced 2000 Won and Bang Ye Dam, respectively.

The artists gave their all to their performances while the judges, who were also their producers, watched with the same nervousness that the artists were feeling. The producers’ pride, anxiety, and sympathy showed in their evaluation of the competitors, as they rose to both defend and critique the performances. When both YG and JYP said that Akdong Musician should stick to their self-composed songs, BoA, who suggested that the group cover 10cm’s “Love in the Milky Way Café,” argued, “They were under a lot of pressure because they felt compelled to perform self-composed but I wanted them to feel free this time to emphasize their youth.” In a reversal of roles, YG defended the vocal style of 2000 Won when JYP and BoA criticized the singing as old-style. He argued the style suited the song; 2000 Won had picked an old Korean hit called “A Million Roses” by the veteran singer Shim Soo Bong.

In the end, 2000 Won was eliminated this week while Akdong Musician, Bang Yeh-dam, and Andrew Choi advanced as the Top 3. 2000 Won showed tears as the group thanked the judges and vowed to become better artists in the future.

The competition will only get fiercer as the remaining artists advance into the semi-final round. The pressure also grows on JYP, SM, and YG to help produce the winning stage so viewers can expect more exciting performances and higher energy in the next episode of “K-Pop Star Season 2.” Who will advance to the final round and who will be eliminated? Stayed tuned.