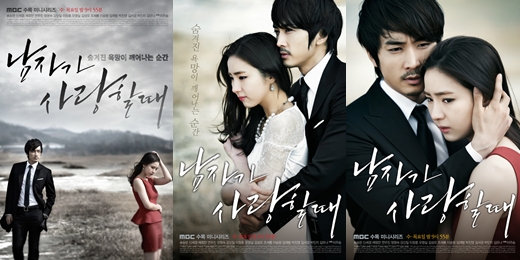 Drama posters for MBC‘s upcoming “When A Man Loves” have been released.

These posters capture the emotions and portrayals of a mixed-up love in a melodramatic way. The posters do a good job in bringing out the melancholy and lonely feelings among the four leading stars, while highlighting the actor’s dazzling visuals. Each of the actors’ facial expressions also heightened the emotional charge that this drama will bring in the near future.

The photo shoot for these posters took place on March 9. It is said that Song Seung Hun was able to easily bring out his complex emotional facial expressions at the time.

Shin Se Kyung‘s various outfits, such as the lacy white dress, accentuated her lovely curves. It is said that Shin Se Kyung kept a bright face and energy despite the high winds and cold temperatures of the day of the shoot.

Yeon Woo Jin also reportedly showed his professionalism and care for others by bending his knees in order to match Shin Se Kyung‘s height throughout the photo shoot.

“When A Man Loves” is a melodrama about love and other dilemmas among the leading roles. It will follow after the end of “7th Level Civil Servant” and air its pilot episode on April 3.