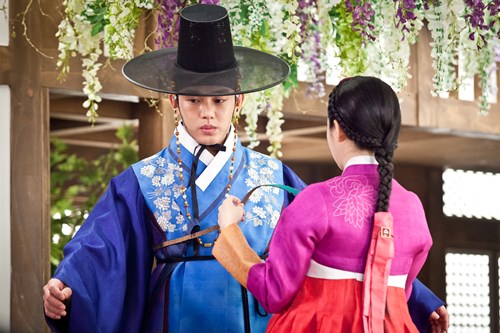 SBS’s highly anticipated drama, “Jang Ok Jung, Live for Love,” (henceforth “Jang Ok Jung”) tells the story of the titular concubine (Kim Tae Hee) of the Joseon Dynasty, who is historically known as being behind the deposition of King Sukjong’s (Yoo Ah In) wife, Queen In Hyun. Jang Ok Jung has often been vilified in countless retellings of the famous historical event but SBS is taking on a re-imagining of the figure, focusing on her role as a fashion designer and cosmetics maker, as well as her love story with King Sukjong.

Many viewers have been curious about how the new love story will look like, especially with Yoo Ah In and Kim Tae Hee in the lead roles. Thankfully, SBS has released stills of the first meeting between Jang Ok Jung and King Sukjong that emphasize the awkwardness and innocence of love blossoming. The stills show Jang Ok Jung measuring the clothing size of King Sukjong (then Prince Lee Soon), confident and friendly, without the distance that is often shown in front of royalty, piquing viewers interest in the fateful meeting.

Representatives from the set stated that even though it was the first filming between between Yoo Ah In and Kim Tae Hee for the drama, the actors showed good harmony, which promises exciting onscreen chemistry.