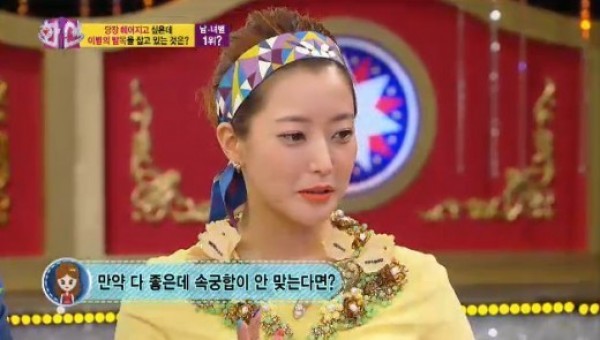 On the most recent episode of SBS “Hwashin,” Kim Kyung Ho, Ka Hee, No Sa Yeon, and Big Bang‘s G-Dragon and Daesung appeared as guests and talked about various things. One of the discussion topics of the night was “the reason why you can’t break up with your lover, when you know you want to break it off as soon as possible.”

All cast members shared their past experiences in not being able to break up with a lover because of financial issues, good memories, attachment and so on. When everyone thought the discussion was over, Shin Dong Yup brought up a sensitive subject which he premised with “This is a little tricky to say on camera.”

Yoon Jong Shin sensed that this was going to be an adult-friendly topic and said, “If Shin Dong Yup is hesitant like that, it’s a really explicit question.” However, neither Shin Dong Yup nor Yoon Jong Shin started the conversation. Kim Hee Sun, who could not wait any longer, asked all cast members for Shin Dong Yup, “Is sexual chemistry really important?” None of the cast members could come up with an appropriate answer to Kim Hee Sun’s explicit question and kept waiting for someone else to respond.

Kim Hee Sun asked once again, “You like everything about a person, but have no sexual chemistry. Would you be able to love him or her?” While everyone was just looking around, hoping that the awkwardness would pass soon, Kim Kyung Ho was the first to break the awkward silence that filled the studio. He responded, “I mean, we are all adults. So wouldn’t that be important?” Yoon Jong Shin added, “It’s better to have a good sexual chemistry with someone you love.” All the while, the youngest cast members G-Dragon and Daesung politely smiled and listened to others’ opinions.

While the awkward atmosphere lingered in the studio, Shin Dong Yup, who first started the 19+ conversation, abruptly ended the discussion by saying, “Yeah, but what’s the most important is the inner side of a person.” His sudden wrap-up made everyone burst into laughter.