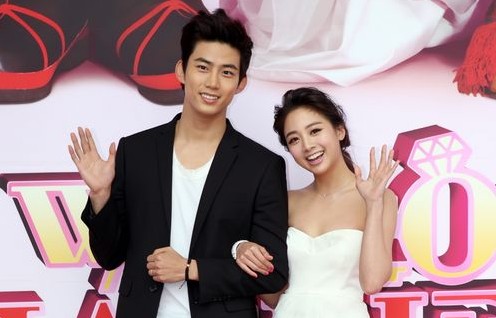 During the conference, Taecyeon and Wu Ying Jie seemed very comfortable with each other, exchanging jokes. When a highlight clip of Wu Ying Jie saying in an interview for the show that she liked Nichkhun the most out of 2PM, Taecyeon playfully threatened to leave, exclaiming, “I don’t want to do this!” The Taiwanese singer quickly explained, “It was a joke. I like Taecyeon much more now.” She added, “When he gives his opinion, he seems very serious, but he also has a playful side. He has a mysterious aspect to him.”

When asked by a reporter if he can describe his partner with a song title, Taecyeon wittily replied, “10 Points Out of 10,” referring to his group’s debut song. Wu Ying Jie returned the compliment, also giving him 10 points out of 10 as a husband.

It was also revealed this day that Taecyeon proposed to his partner by reading his own letter. The artist explained that he was very nervous during the event and Wu Ying Jie also added that her heart starting beating faster at that moment.

“We Got Married- Global Edition” will premier Saturday, April 7 across 21 countries with a total run of 15 episodes. MBC will also release behind-the-scenes footage everyone Sunday after the broadcast on Youtube.