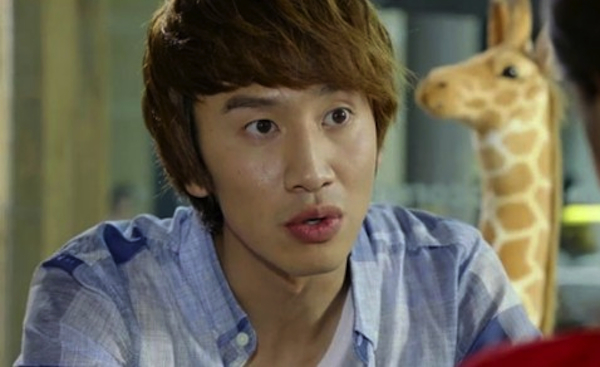 On the most recent episode of SBS “Running Man,” actresses Lee Yeon Hee and Go Ara appeared as guests for “Running Man Mini-Series Trilogy Special.” During their transition from one place to another, Lee Kwang Soo wore a long-haired wig and joined the women’s car where Song Ji Hyo was.

When Song Ji Hyo asked what he’s doing in the women’s car, Lee Kwang Soo told her that he is a woman, too, flipping his beautiful long hair back. Song Ji Hyo, who was fixing her makeup, asked Lee Kwang Soo if he wanted to use her lip balm, and he puffed his lips up, asking her to apply some directly on him. Song Ji Hyo jokingly commented, “You look even more haggard than before.”

After Song Ji Hyo and Lee Kwang Soo fixed their makeup together, they posed with Lee Yeon Hee. Lee Kwang Soo seemed as if he is in love with himself in drag. He confidently commented, “Looking at us like this, I think I look not too shabby,” and “I can’t tell who’s the man in this crowd, sitting here together with Yeon Hee.”

Also on this episode of “Running Man,” Gary got a new nickname “Gary Guard” from his perfect protection of his partner Lee Yeon Hee during a couple’s dodge ball game.