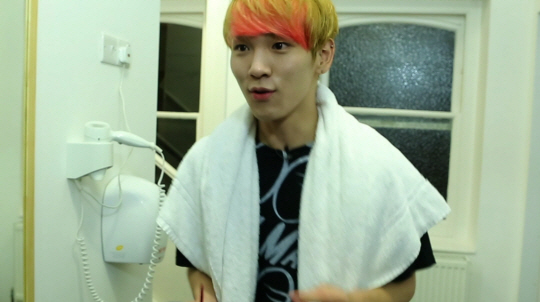 SHINee’s Key Colors Own Hair to Save Money

SHINee member Key is widely known as a fashionista who is not afraid to try new clothing and hair styles. As part of his unique look, Key has frequently changed hair colors, unafraid to stand out among the crowd with purple, blue, or even orange hair. Fans might have suspected that these frequent changes were costly but it seems that the singer is quite thrifty, coloring his own hair at home.

On the April 2 episode of SHINee’s ongoing special television series, “One Fine Day,” fans will be able to see Key show off his home-grown hair coloring skills. In this episode, Key returns to the guesthouse from a outing at a famous London shopping district and proceeds to dye his hair with a professionalism that shocks the surrounding female staff members. When asked why he is so good at coloring hair, Key replied, “It’s expensive to dye hair at the hair salon. I have often dyed my own hair at home due to the inflexibility of prices at certain hair salons.”

SHINee
Key
KPLG
How does this article make you feel?