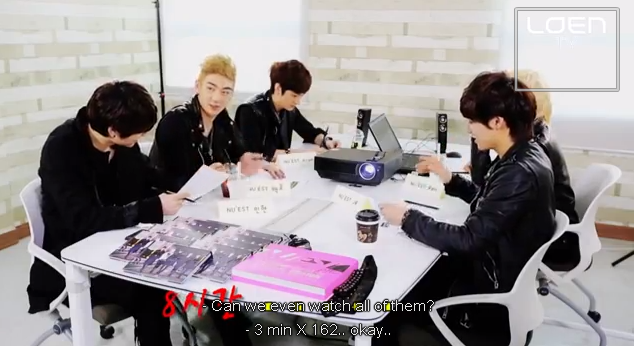 We previously reported that NU’EST was holding a dance cover contest for their latest song, “Hello,” through LOEN’s official Youtube channel. The agency uploaded a new video on April 1 showing the NU’EST members personally viewing and judging the entries.

The video shows each member discussing what the most important criteria are in judging the submissions, ranging from Ren’s focus on fashion and facial expression to Baekho’s emphasis on the contestants’ ability to hit the three most important moves in the choreography. The video also shows the members watching the entries with both excitement and seriousness, marveling at the participants’ creativity and dance skills.

There were a total of 162 entries and each member of NU’EST picked 2 of their favorites. Together they picked the winner, who will receive a signed, limited edition of NU’EST’s album, a personal message from the members, and the necktie from NU’EST’s outfit. You can watch the message at the end of the clip, as well as a short video compilation of the entries.

Check out the video to see who won! You can turn on the captions for English subtitles.

NU'EST
KPLG
dance cover contest
How does this article make you feel?